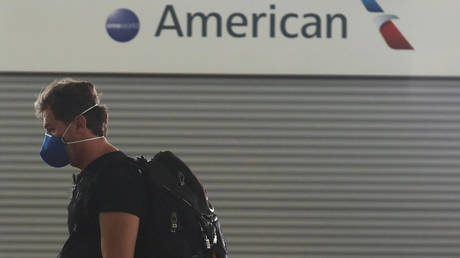 A family of 20, including 10 children, was forced off an American Airlines flight over a trivial violation of the company’s mask policy, one family member claims, insisting his face covering only briefly slipped under his nose.

While boarding a flight at the Salt Lake City International Airport along with 19 relatives on Sunday, Scott Wilson said he was asked to fix his mask after it momentarily slid down his face. Though he says he “dropped everything” and corrected the issue before finding his seat, the family was soon accosted by a gate agent.

“He said, ‘Well, [the crew wants] you to leave the plane,’” Wilson told Salt Lake City’s KSL. “I said, ‘What, they want us to get off the plane? Can we talk, can we have a conversation?’ Nobody has even really talked to us.”

Also on rt.com Black passenger asked to get off US flight after apparent lowering of TRUMP facemask to eat peanuts (VIDEO)

According to Wilson, the agent left for a short time, but returned saying that the captain of the flight crew insisted they be removed from the plane. “I’m sorry, it has to be the whole family,” the airline employee reportedly said.

The entire family, consisting of 10 adults and 10 children aged between 3 and 13, was then made to leave the aircraft – but not without a fight from fellow passengers, Wilson said.

“There was actually a couple of families around us that stood up and was like, ‘This is wrong, that guy is being a jerk,’” he said, referring to the gate agent. “‘He was yelling at other people as they came on, too, and he was already mad at these guys. They didn’t do anything.’”

“He says ‘I’m sorry it has to be the whole family’.”At 10:00, hear from a Utah man who says he and his family of 20 were kicked off their flight @KSL5TVpic.twitter.com/dpgYZzjb1s

A witness to the confrontation told KSL the family’s removal was not justified and that Wilson was complying with the mask rule, adding that he tried to speak with an airline employee to undo the decision, but it was too late.

Other staff were more sympathetic, however, helping the family to rebook separate flights through American Airlines, Delta and United, getting them to their destination in Hawaii on the same day.

“They were livid,” Wilson said of the more agreeable gate agents.

They were mad at this guy and said, ‘He is the one with the problem, you guys did nothing wrong. We’ve never seen anything like this. We’ve never had a situation like this, and he was totally in the wrong by doing what he did.’

Also on rt.com Mask madness is causing Kens & Karens everywhere to beat the cr*p out of each other (VIDEOS)

American Airlines addressed the incident in a statement, saying the family was reported to be violating the company’s mask policies, which require face coverings be “worn properly over the nose and mouth at all times.” (RT)