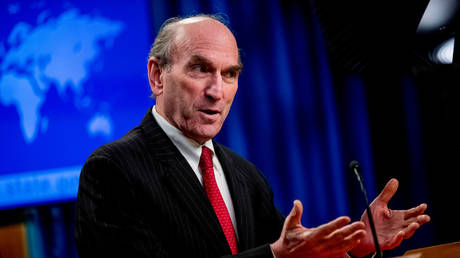 Abrams, who oversaw a series of failed coups in Venezuela both in the past year and during the botched 2002 coup against then-President Hugo Chavez, will take over from Brian Hook, who has “decided to step down,” according to a press release from Secretary of State Mike Pompeo.

NEW: as reported by @SangerNYT@michaelcrowley, Iran envoy Brian Hook is leaving his post, to be replaced by Venezuela Envoy Elliott Abrams. pic.twitter.com/88HwweWwfw

Pompeo lauded Hook’s efforts in the statement, declaring he had “achieved historic results countering the Iranian regime.” The outgoing official oversaw the Trump administration’s “maximum pressure” campaign against Tehran, leveling sanction upon sanction against the Islamic Republic after withdrawing the US from the JCPOA nuclear deal in 2018. Hook praised his own record to the New York Times on Thursday, declaring that “by almost every metric, the regime and its terrorist proxies are weaker than three and a half years ago.”

“We have been very successful,” he said. (RT)