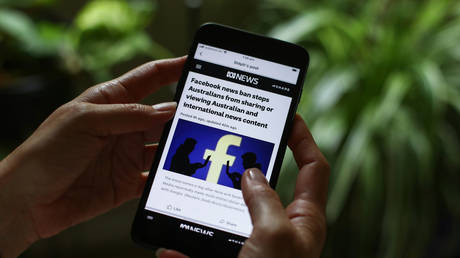 Facebook’s parent company has threatened to quit carrying news on the world’s largest social media platform if US lawmakers pass a bill that could give media outlets more leverage in negotiating usage fees for their content.

Members of Congress reportedly plan to add the media initiative – called the Journalism Competition and Preservation Act (JCPA) – to a must-pass annual defense authorization bill to help push it through. The legislation would make it easier for media outlets to negotiate collectively for a larger share of revenue from the ads posted on their content, a boost that could be especially significant for local newspapers and broadcasters.

“If Congress passes an ill-considered journalism bill as part of national security legislation, we will be forced to consider removing news from our platform altogether rather than submit to government-mandated negotiations that unfairly disregard any value we provide to news outlets through increased traffic and subscriptions,” Meta spokesman Andy Stone said on Monday in a Twitter post.

Meta statement on the Journalism Competition and Preservation Act: pic.twitter.com/kyFqKQw7xs

Stone argued that publishers and broadcasters put their content on Facebook because it boosts their profits. “No company should be forced to pay for content users don’t want to see and that’s not a meaningful source of revenue. Put simply: the government creating a cartel-like entity which requires one private company to subsidize other private entities is a terrible precedent for all American businesses.”

The JCPA has bipartisan support in the House and Senate, as well as bipartisan opposition. The News Media Alliance, an industry trade group that has lobbied for the JCPA, called Meta’s threat “undemocratic and unbecoming.” The group added that similar “threats were attempted before the Australian government passed a similar law to compensate news outlets, played out unsuccessfully, and ultimately news publishers were paid.”

The American Civil Liberties Union is among the groups that have opposed the bill, claiming that it would create an “ill-advised antitrust exemption for publishers and broadcasters.” Critics also have pointed out that the bill doesn’t require that funds generated through social media fees be used for paying journalists. (RT)