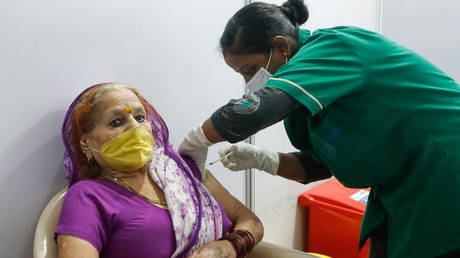 A woman reacts as she receives a dose of Covishield during the start of a four-day "Vaccination Festival" in Mumbai, India, April 11, 2021. ©  REUTERS/Francis Mascarenhas

India is scrambling to counter a new hybrid of coronavirus detected in the country, as medical professionals warn that the new strain could be resilient against the domestically produced Covishield vaccine.

Classified as ‘B.1.617’, the “new double mutant strain” is suspected of fueling a rise in new cases of the disease in India. Dubbed the ‘India’ variant, the strain has reportedly been detected in at least eight countries worldwide.

According to Dr. Shiv Kumar Sarin, a government adviser and head of the Institute of Liver and Biliary Sciences (ILBS) in New Delhi, the variant can be described as a hybrid of the South African, UK, and Brazilian strains of the virus.

Containing the mutation could pose difficulties due to the fact that vaccines have been shown to have varying efficacy against different Covid-19 variants. India’s Covaxin, as well as Covishield, a domestically produced version of AstraZeneca’s jab, provide protection against the UK variant. But results have not been promising when Covishield was tested on the South African strain. (RT)

On May 13, the weather is expected to be changeable cloudy, mainly rainless in Baku…