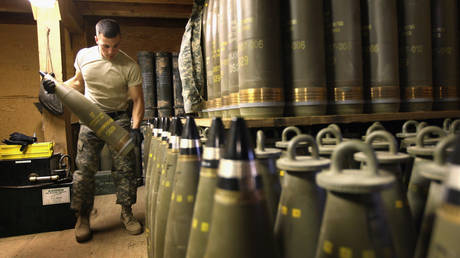 The US does not have an “infinite supply” of weapons and munitions to send to Kiev, analysts told CNBC FILE PHOTO. An artilleryman stocks shells for a 155mm Howlitzer. © John Moore / Getty Images

Washington may not be able to support Ukraine in the conflict against Russia “for as long as it takes” due to a shortage of the industrial capacity needed to replenish munitions and weapons it sends to Kiev, CNBC reported on Wednesday, citing military analysts.

“There is a point where… the Ukrainians will need to be cautious about their rate of expenditure and where they prioritize those munitions, because there isn’t an infinite supply,” Jack Watling, an expert at the Royal United Services Institute in London, was quoted by the news network as saying.

The problem reportedly stems from the structure of military production in Western nations, particularly the United States, which was tailored for peacetime and cannot sustain a protracted draw on stockpiles during a major armed conflict, such as the one in Ukraine. 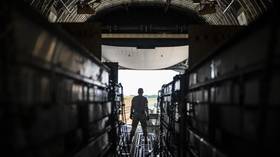 For instance, according to CNBC, the US arms industry can produce about 30,000 rounds per year for 155mm howitzers. The Ukrainian military consumes that amount in about two weeks. Another example cited is the Javelin shoulder-fired anti-tank missile. US production of the weapon stands at around 800 units per year, but Washington has sent some 8,500 of them to Ukraine.

Reserves of HIMARS multiple rocket launchers, Stinger anti-aircraft missiles, and M777 howitzers are running low in the US, the article said, citing a recent report by the Center for Strategic and International Studies. Defense officials in the US and other Western nations which are arming Ukraine, object to the draining of stockpiles intended for their own training and readiness.

“I’m greatly concerned. Unless we have new production, which takes months to ramp up, we’re not going to have the ability to supply the Ukrainians,” Dave Des Roches, a senior military fellow at the US National Defense University, told CNBC.

We need to put our defense industrial base on a wartime footing. And I don’t see any indication that we have.

According to CNBC, ramping up military production requires securing additional sources of essential parts such as computer chips and skilled labor, which may prove challenging.

For example, US defense contractor L3Harris Technologies bought back and cannibalized its own old radios to get components for new products, Defense News reported last week. The move was necessary to meet customer demand amid the global semiconductor crunch, the outlet explained.

CNBC suggested that Kiev may turn to new suppliers of weapons, such as South Korea, or have to switch to less capable arms that the US and its European allies would be willing to share. (RT)