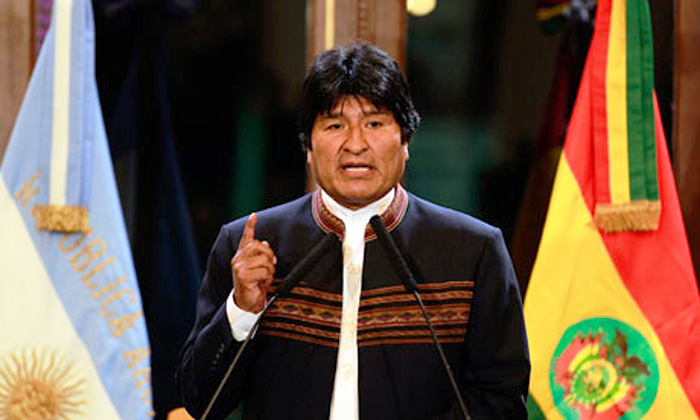 The Bolivian justice ministry has filed a criminal complaint against former President Evo Morales for statutory rape and human trafficking.

It comes after photographs were published in national media of the 60-year-old ex-leader with a young woman who was reportedly a minor at the time.

He has not commented on the allegations.

Mr Morales was president from 2006-2019 and lives in exile in Argentina after a disputed election in November.

While in exile, Mr Morales has been accused of a range of offences.

An alleged relationship between Mr Morales and a 19-year-old woman identified only as N.M began when she was a minor.

Deputy Minister Guido Melgar told a press conference on Thursday that photos taken from a mobile phone belonging to one of the woman’s relatives show her while on trips with Mr Morales.

“The curious thing here is that she was a minor at the time and as we all know, for a minor to travel, she needed her parents’ permission,” he said.

She was 14 when she allegedly began to accompany the president on trips, reports Spanish news agency EFE.

The role of the young woman’s family in allegedly “allowing” Mr Morales to travel with her as a minor is also being investigated, Mr Melgar said.

Mr Melgar said the government does not know where N.M is, but have evidence that her family visited Argentina, where Mr Morales is living.

Under Bolivian law, the crime of rape is punishable with between two and six years in prison, and human trafficking with 15 years.

Who is Evo Morales?

He was one of Latin America’s longest serving leaders with almost 14 years as president of Bolivia.

Born in a rural village in the western Oruro region into a family from the Aymara group, he became the country’s first indigenous leader. Indigenous peoples make up around two-thirds of the population.

He was part of the “pink tide” of left-wing leaders in Latin America that promised wealth distribution and more power for historically oppressed groups.

Since he came to office, extreme poverty dropped from 38% in 2006 to 17% in 2018, but critics said levels rose again in his final two years in office.

After a controversial decision by the constitutional court to scrap presidential term limits, Mr Morales ran for a fourth consecutive term in office in October 2019.