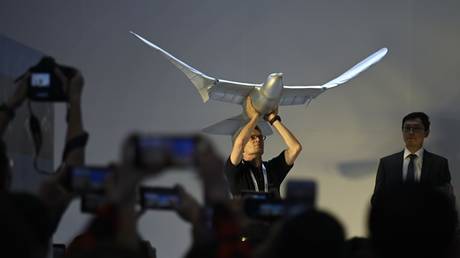 The largest robot convention in the world has got underway in China and this year the bots are more impressive and advanced than ever before.

The fifth annual World Robot Conference is being held in Beijing from August 20 to 25, attracting over 800,000 visitors. The event showcases more than 700 models of the latest robotic technologies and upgrades, and, this year, they can swim, fly and even perform brain surgery.

Created by German firm Festo, the ultralight flying drone was inspired by the herring gull. With a wingspan of two meters, the flight model can take off, fly and land using its own wings and just 23 watts of power – half the power used by some laptops.

At the 2019 World #Robot Conference, German firm @FestoAG showcased its SmartBird whose design was inspired by the herring gull. It was created with the best aerodynamics and maximum agility in mind and able to take off, fly and land under its own power. @EChinaNews#roboticspic.twitter.com/VolPWD4UjP

Named XR-1, the cute commercial humanoid service robot is powered by a “constantly evolving cloud brain.” It can perform tasks like picking up objects, opening doors or even threading a needle, “making it perfect as a concierge, receptionist, business guide, or VIP service staff under different scenario,”according to its creator CloudMinds. (RT)

“Azerbaijan Innovation house” to be founded in Silicon Valley

Seven ‘ASAN Service’ centers to be opened this year

Seven ASAN Service centers will be opened this year, Ulvi Mehdiyev, Chairman of the State…

U.S. President Donald Trump said on Monday that he will release the long-awaited political aspect…

Australia readies for more bushfires with temperatures set to soar

The new strain of coronavirus spreading across China claimed its first victim in Beijing, officials…

Austrian investors could be interested in Azerbaijan’s special economic zones

An Air India plane has been on stand-by, waiting for a green light from Beijing…