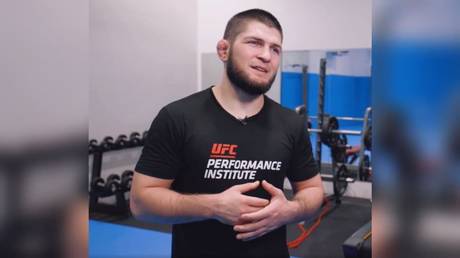 Former UFC champion Khabib Nurmagomedov says that he has received interest from a host of football teams interested in securing his services, but admits that he isn’t exactly in ‘football shape’ as he plots his next athletic move.

Nurmagomedov has been a regular fixture on the football field since he announced his retirement from mixed martial arts last year after moving his career record to an unprecedented 29-0 but the Russian icon, who is an avid supporter of Real Madrid, has so far resisted any overtures from a host of Russian clubs interested in signing him to a deal.

However, speaking to fans in a Facebook Q&A on Friday evening Nurmagomedov hinted for the first time that he might be prepared to accept a deal from one of the top clubs to fulfill his “childhood dream.”

“A lot of football clubs, they offer me [a contract],” said Khabib during the online video chat with fans which was posted to his official Facebook page.

“When you have to fight in MMA and you have to play in football, this are two different [things].

Read more:   Nazarbayev expressed concern over the escalation of the Nagorno-Karabakh conflict

“But if some clubs offer me [a deal] and they make me interested, I’m going to accept this. This is my childhood dream.”

Nurmagomedov’s retirement has seen him post several clips to social media of him showing off his fancy footwork on a football pitch, with this skills apparently impressing some figures within Russian football.

It was revealed in January that Russian Professional Football League team FC Kamaz had investigated the possibility of adding Khabib to their ranks, while just this month lower-league team Legion Dynamo Makhachkala openly courted the mixed martial arts star.

Nurmagomedov appeared to note Legion Dynamo Makhachkala’s interest, writing on Instagram that he has the necessary skills – even if he might have added a few pounds to his frame in retirement.

“Who remembers the Ronaldo of 2008, put on a bit of weight but still with firepower. [FC Legion Dynamo Makhachkala] I need motivation brothers,” Khabib wrote in Russian in the caption, referencing former Brazil star Ronaldo.

Khabib, who counts the likes of Cristiano Ronaldo among his friends, has long been an admirer of the ‘beautiful game’ and has previously described football as the “king of sports”.

“When I grew up I all the time watched old Ronaldo from Brazil – but what Cristiano Ronaldo did, this is amazing,” Khabib explained further in the Q&A video.

“I think football is much better [compared to MMA]. They make the World Cup one time in four years. This is very big history.

“I remember when [I first watched] the World Cup Final it was 1998 in France. For me it was like the best thing to ever happen in my life. Football is on another level.

“My best team is Real Madrid but for watching, English Premier League is the best.”

But when it comes down to brass tax, there is one footballer who Khabib thinks stands head and shoulders above his peers: Cristiano Ronaldo.

“In 2004, he was in the final [of the European Championships]. In 2016 he won the Euros. He was six times in the final of the Champions League. He won Spanish league, Italian league, English Premier League. He won five times the [Ballon d’Or]. Cristiano Ronaldo I think is the best,” he said.

It will be interesting to see if and when Khabib makes the jump from the cage to the football field – and also to see if one of the many teams interested in him can succeed where UFC boss Dana White failed and tempt the global superstar back into a sporting arena. (RT)