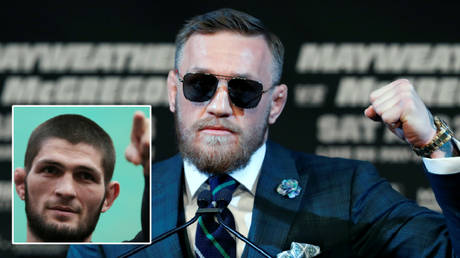 A former champion has suggested that the UFC will never take action against Conor McGregor for “pushing the envelope” because he is worth too much money to them – and has dared him to try punching Khabib Nurmagomedov.

Ex-lightweight and featherweight ruler McGregor has been in the spotlight for all the wrong reasons this week after allegedly punching a DJ in Rome, where his son, Rian, was christened at the Vatican.

While the Irishman has been branded a “bully” by one-time middleweight champion and now pundit Michael Bisping, former two-weight title holder Henry Cejudo has reacted to the unproven claims by suggesting that the MMA megastar would not fare well against his former arch-rival.

Retired Olympic wrestling gold medalist Cejudo also claimed that UFC president Dana White, who has said he does not know enough about the accusations against McGregor to comment, would never risk his relationship with arguably the most lucrative name in the sport.

“I’m not to say Conor McGregor loves the fact that he can push the envelope, but Dana’s not going to do nothing,” Cejudo told his podcast.

“That’s the cash cow. He knows the golden rule – the guy with the gold makes the rule.

“Pick the right person to sucker punch, man. Sucker punch Khabib – we’ll see how that goes for you.”

Cejudo mocked McGregor as McTapper and told him to “get your sh*t together”.

“Go to church, dude,” ‘The Messenger’ added. “Find a bigger purpose than yourself. Focus on your family… you’re making us all look bad.”

As part of one of the most bitter feuds in UFC history, which reached fever pitch when McGregor attacked a bus backstage in Brooklyn that Nurmagomedov and several other fighters were seated on, the pair finally met in the octagon in October 2018.

Humbling his foe via a fourth-round submission, Khabib then launched an assault on members of McGregor’s entourage and received a ban, yet their feud has continued beyond the Russian’s retirement last October.

Nurmagomedov’s decision to step down was fueled by a promise he made to his mother not to continue fighting after his father, revered coach Abdulmanap, died from Covid complications.

And McGregor has poked fun at that tragedy, as well as taking a dig at Dagestanis and wishing death on Nurmagomedov’s manager, Ali Abdelaziz, in a swiftly-deleted tweet last week.

Also on rt.com ‘When you die, I celebrate’: McGregor takes aim at Dagestan, wishes death on Khabib’s manager before deleting poisonous tweets

“I hate you, bro,” McGregor wrote on Twitter to the Egyptian. “When you die, I celebrate.”

“You are sick. Do you think it is funny? I’m done responding to your sick ass,” replied Abdelaziz to McGregor, who fired back with a tweet he again took down that read: “Smell you later, sh*t the bus.”

Cejudo and Nurmagomedov both conduct their affairs under the banner of Dominance MMA, the company led by Abdelaziz, making it easy to see why he would side with them and not McGregor.

Apart from performing media dueites alongside the likes of Mike Tyson, Cejudo has expressed a desire to return to the octagon in recent weeks.

Retiring from his sport as a double champion after beating Dominick Cruz, ‘Triple C’ is now trying to trash-talk his way into a fight with Australian featherweight champion Alex Volkanovski.

Were he to come back and best Volkanovski, the American would be the first combatant to ever claim titles across three different weight classes in the elite UFC following his dominance at flyweight and bantamweight. (RT)