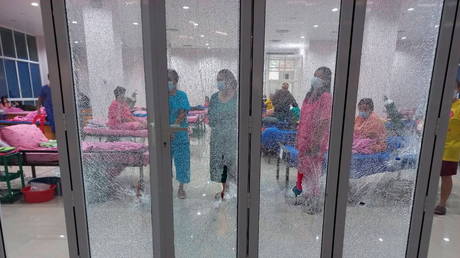 Patients are seen behind a broken glass door after a shooting in a coronavirus (Covid-19) field hospital in Pathum Thani, Thailand June 24, 2021 © Dailynews via REUTERS

Two people have been killed, including a hospitalized Covid-19 patient, after a former soldier, dressed in combat uniform and a red beret, attacked a coronavirus field hospital in Pathum Thani Province.

Buarabporn confirmed that the attacker, a former soldier, believed to be 23 years old, had killed two people. One, a patient, was killed in the hospital, while a shop worker was shot dead earlier over a dispute in Bangkok.

The field hospital in Pathum Thani where the ex-soldier fired gunshots had previously been a drug rehabilitation center and had been refitted to treat Covid-19 patients.

Footage from CCTV shows the man, identified by local media as Kawin Saengnilkul, dressed in a red beret, full combat gear and brandishing a weapon, entering the hospital and leaving a victim behind him. (RT)