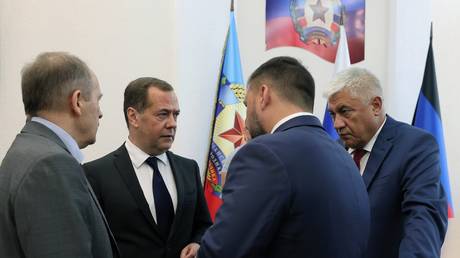 Russia’s former president, Dmitry Medvedev, has warned of possible “accidents” at European nuclear sites, also accusing the Ukrainian government of risking a “new Chernobyl” as its forces continue to launch attacks near a major power plant.

Medvedev took to Telegram on Friday to sound alarms about the Zaporozhye nuclear plant – which was captured by Russian troops in late February and continues to be operated by local personnel – claiming that Ukrainian bombs were gradually inching closer to the facility.

“Kiev scumbags and their Western patrons seem ready to arrange a new Chernobyl. Rockets and shells are getting closer to the reactor of the Zaporozhye NPP and to the storage of radioactive isotopes,” he said.

The ex-president, who now serves in a senior position on Russia’s Security Council, went on to dismiss Ukrainian charges that Moscow itself is behind strikes near the plant, calling it “obvious, 100% nonsense, even for a dim-witted Russophobic public [in the West].” (RT)