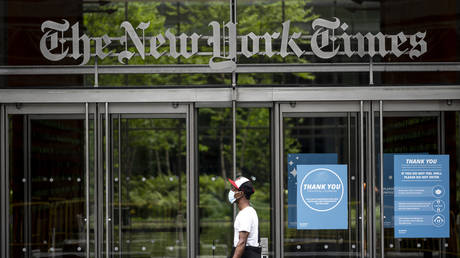 A former New York Times science reporter, who resigned last month amid allegations of racism, says the public scandal involving him may have been fueled by his role as a troublemaking union negotiator.

Donald McNeil Jr, who had worked at the Times since 1976, resigned in early February. His distinguished career ended after he was accused of racism over using a slur word during a trip with students to Peru in 2019 – a revelation that caused an internal revolt by newspaper employees. In a lengthy four-part explanation he published on Monday, he told his side of the story and suggested that at least part of it revolved around a long-lasting personal conflict between himself and Times managers, stemming from heated collective bargaining.

Also on rt.com Canceling their own? NYT’s lead Covid-19 reporter resigns after reprimand for use of ‘N-word’ fails to appease co-workers

The scandal erupted in January, after the unfortunate trip was described by the Daily Beast in a way most unfavorable to McNeil, who at the time was Times’ top reporter on Covid-19 pandemic. He “repeatedly made racist and sexist remarks throughout the trip,” the story claimed, including using the N-word. He also “suggested he did not believe in the concept of white privilege” and “made racist comments and used stereotypes about Black teenagers,” the allegations continued.

McNeil’s account, which he said he published on Medium as soon as his departure date arrived, gives a different picture of what happened in Peru, and details his perspective on the Times’ initial response to complaints about it and the events that came after the Daily Beast exposé. He said the incident had been down to “a series of misunderstandings and blunders” partially caused by his own character flaws, but he rejected his characterization as a bigot.

Donald McNeil has been telling the truth about this virus from day one. As a proud Times Guild member He advised us as we prepared for this pandemic. Sometimes the truth hurts, but it doesn’t negate the fact that it’s still the truth! https://t.co/syozzan2p4

He said his own recollections of the field exercise in Latin America differed from what was described in the media, but acknowledged he could be blunt and sarcastic in expressing his political views, which had been revealed in conversations during the trip and had apparently offended the sensibilities of the left-leaning students.

“Obviously, I badly misjudged my audience in Peru that year. I thought I was generally arguing in favor of open-mindedness and tolerance, but it clearly didn’t come across that way. And my bristliness makes me an imperfect pedagogue for sensitive teenagers,” he said.

He did use the N-word, he affirmed, which he said had happened when he was asking about the details of a case discussed by the group, in which a school disciplined a student for using the term when she was 12 and was “goofing around” with a black friend. Any issue the student might have had with him repeating it was not brought up at the time, McNeil said, and had it been, he explained, “I probably would have pointed out that I’m a Times reporter and we print the real grownup versions of bad words when we have to.”

“Was I five decades older than the students in Peru and out of touch with their sensibilities? Absolutely. Did I have perspectives to offer that they didn’t get at prep school? I think so. Am I a racist? I don’t think so – after working in 60 countries over 25 years, I think I’m pretty good at judging people as individuals,” he wrote.

Read more:   How coastal and frozen regions will change with climate change

The Times handled the complaint internally in 2019, ultimately disciplining McNeil. His explainer includes email exchanges he had with his former Times editor and personal friend Jan Benzel. McNeil said he agreed to take part in two student trips to Peru in 2018 and 2019 as a favor to Benzel, who recruited Times experts for the program.

In the emails, McNeil repeatedly expressed frustration with how the complaints were handled – unfairly, in his view – and particularly with Charlotte Behrendt, the HR official who oversaw the investigation. She “makes the Times newsroom more like North Korea every day” and has turned it into “a mean, spiteful, vengeful place where everyone is looking over his/her shoulder,” McNeil wrote to Benzel. (RT)