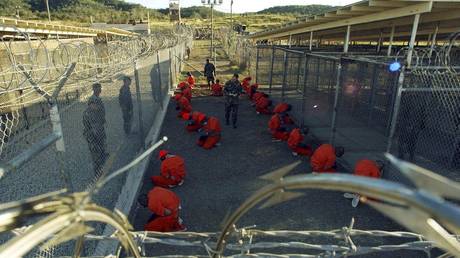 Retired US Air Force Col. Moe Davis spent years prosecuting alleged Islamist terrorists at Guantanamo Bay, but now his sights are set on domestic threats, including the Republican congressman who beat him in the 2020 election.

“I was chief prosecutor at Guantanamo for over two years, and there’s far more evidence of Congressman Madison Cawthorn’s guilt than there was of guilt for 95+ percent of the detainees,” Davis said Monday on Twitter.

It’s time we start a domestic war on sedition by American terrorists.

The message was accompanied by photos of Cawthorn (R-North Carolina) and another freshman member of Congress, Lauren Boebert (R-Colorado). Davis, a former Democrat congressional candidate, didn’t specify in his tweet what actions by Cawthorn might constitute sedition, but Democrats have called for his removal from office for saying that President-elect Joe Biden’s election victory was fraudulent and using such language as “fight back” to allegedly incite the January 6 US Capitol riot.

I was Chief Prosecutor at Guantanamo for over 2 years and there’s far more evidence of Congressman Madison Cawthorn’s guilt than there was of guilt for 95+ percent of the detainees. It’s time we start a domestic war on sedition by American terrorists.@CawthornforNC#MadCawpic.twitter.com/ImbOB3yHVZ

More than 59,000 people have signed a change.org petition demanding his resignation. Cawthorn, a paraplegic who at 25 is the youngest member of Congress, blamed the violence during the riot on left-wing agitators. He later condemned the “actions of a violent few” as “cowardly and pathetic” and said it was “sickening and infuriating” to see people with American flags and Trump flags storming the Capitol.

At a time when Democrats are branding supporters of President Donald Trump, including members of Congress, as dangerous white supremacist, Davis’ tweet took the discourse to an even higher level. Fox host Tucker Carlson said the retired colonel is essentially calling on people like Cawthorn and the millions of Americans who voted Republican to be “subdued by force.”

“Has Twitter seen Moe Davis tweet?” Carlson asked. “Has the Secret Service? Do they care? Will a single one of Col. Moe Davis many allies in the Democratic Party denounce what he said or even tell him to cool it a little bit?” (RT)