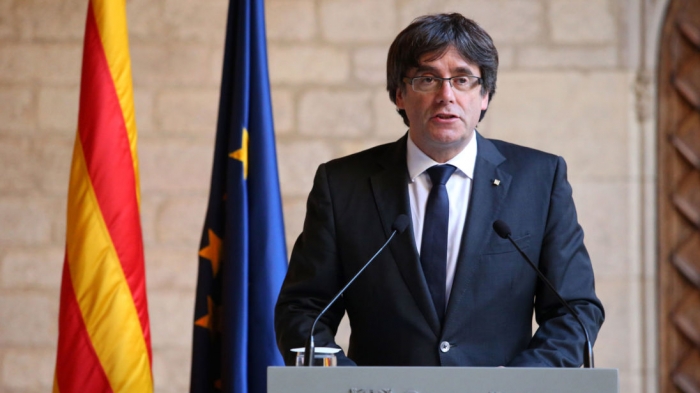 Carles Puigdemont, the former Catalan president who led the region’s failed bid for independence two years ago, has handed himself into judicial authorities in Belgium in response to the reactivation of an international arrest warrant against him earlier this week.

His appearance came as Catalonia braced for a general strike and a huge demonstration in Barcelona following a fourth night of violent protests triggered by the jailing of nine pro-independence leaders by the Spanish supreme court on Monday.

Puigdemont, who led the region between January 2016 and October 2017, fled to Belgium to avoid arrest after being sacked by the Spanish government for staging a unilateral referendum and making a unilateral declaration of independence.

In a statement, Puigdemont’s office said: “[Carles] Puigdemont, accompanied by his lawyers, has appeared, voluntarily, before the Belgian authorities in response to the European arrest warrant issued by the Spanish supreme court.”

It added that he was complying with the warrant but remained opposed to being extradited.

Spain’s supreme court reissued the warrant – on charges of sedition and misuse of public funds – after Puigdemont’s former vice-president and eight other independence leaders were jailed for the same offences on Monday.

Read more:   IAEA president: This conference is an opportunity to exchange ideas about different advances in the field of education and educational assessment

Thousands of people who have marched from across Catalonia are due to converge in Barcelona on Friday afternoon to to protest against the verdict and call for the leaders to be freed.

Peaceful protests, which have long been the hallmark of the pro-independence movement, have been eclipsed this week by violent unrest and running battles between protesters and police.

Barcelona had its worst night of violence on Thursday as pro-independence supporters clashed with police and rightwing groups in skirmishes that lasted into Friday morning.

After another large demonstration broke up, groups of protesters fought police, throwing stones and at least one petrol bomb in an apparent attempt to reach the seat of the Spanish government in the city. A clothing shop was set on fire and a bank vandalised.

One pro-independence protester was badly beaten by a group of rightwing supporters while once again the streets were acrid with the smell of bonfires of burning rubbish. Numerous injuries were reported.

Read more:   Russian official: We have to tell the truth to prevent repetition of such cases elsewhere in the world

As the unrest continued, Catalan TV and the main Barcelona TV channel ceased broadcasting news, as did at least one of the online dailies, in support of Friday’s general strike.

Ninety-seven people have been arrested across Catalonia since the protests began, and dozens injured.

The supreme court’s decision to jail the nine leaders for secession and misuse of public funds over their roles in the failed push for independence has provoked uproar among many Catalans.

Among those heading towards Barcelona on Friday morning was Anna Parella, a hospital worker from the coastal town of Calella. She had joined the march with colleagues to call for independence and the release of the jailed leaders.

“A lot of people have joined us as we’ve gone along and the mood is really nice and festive,” said Parella.

She said the marchers were all peaceful, but added that some people had grown sick of the situation and had begun to go about things the wrong way.

Read more:   UN chief warns of 'point of no return' on climate change

“I’m against the violence and we can’t have people starting to think we’re all violent,” she said. “Our calls will lose their force if they do.”

Catalonia’s pro-independence regional president, Quim Torra, has been criticised for being slow to condemn the violence – and for calling for civil disobedience while sending in Catalan riot police to restore order.

On Wednesday night, Torra said the violence had to stop, but blamed it on “infiltrators” who wanted to sully the good name of the pro-independence movement.

“We cannot allow such groups who infiltrate and provoke to harm the image of a movement which counts millions of Catalans,” he said.

Torra has described the supreme court’s decision to jail the nine leaders as “ignominious” and suggested that another unilateral referendum on Catalan independence should be held.

“If we have been sentenced to 100 years in prison for putting out the ballot boxes, the response is clear: we’ll have to put them out again for self-determination,” he told the regional parliament on Thursday.