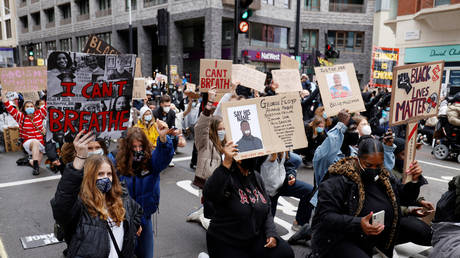 Citizens are protesting the death of George Floyd by marching and kneeling far outside the borders of the United States, with Saturday demonstrations occurring everywhere from the UK to Australia.

The latest kneeling trend, which some critics have called into question, occurred all over the world in major cities on Saturday.

In Turin, Italy, hundreds could be seen not only kneeling, sitting en masse to protest.

Over in the Italian city of Bari, protesters reportedly knelt for a full eight minutes, with some even singing the song ‘One Love’ by Bob Marley.

#BlackLivesMatter BLM protest today in Bari, Italy. This was the end, we were kneeling down and singing One Love by Bob Marley. It was peaceful from start to end, and hearing the anger and pain in the voices of the black students who organized it, as they talked about their- pic.twitter.com/5a0vaXluK0

Hundreds knelt together in England as well.

Citizens demonstrated outside the US Embassy in Paris, France too, at one point taking to kneeling and raising their fists. Speakers at the protest not only mentioned Floyd, but also Adam Traore, an African American man who died in the custody of the French police in 2016, sparking protests against police brutality.

The police had earlier issued a decree banning the protest in the city, noting that gatherings of more than 10 people in public is still prohibited due to the Covid-19 pandemic.

An even bigger crowd, reportedly in the tens of thousands, also took to the streets of Sydney and Brisbane, Australia to protest.

Kneeling has moved beyond just protesters in some nations, with police officers and even politicians joining in on the trend. Canadian Prime Minister Justin Trudeau knelt on Friday in Ottawa at a demonstration, though he was quickly mocked by Twitter users who brought up an infamous blackface photo from his past. (RT)

With masks and gel, Spaniards vote amid new coronavirus outbreaks