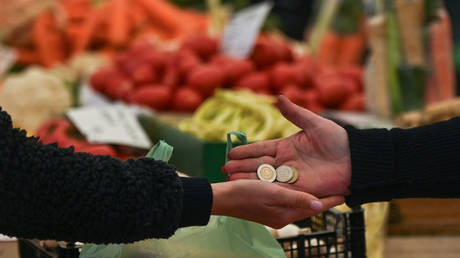 Consumer prices in the 19-member currency bloc have risen by 8.9% in the past year, the highest rate ever recorded © Getty Images / NurPhoto / Contributor

Annual inflation in the Eurozone reached a record 8.9% in July, the latest data from the European Union’s statistics office Eurostat showed on Thursday.

The increase from 8.6% recorded in June is mostly down to energy prices, climbing steadily since the start of the year. The Consumer Price Index reached 7.4% in April and 8.1% in May.

Eurozone energy prices rose by 4.02% from June to July. Other key inflation drivers were food, alcohol and tobacco, which edged up 2.08%. Meanwhile, prices for services and non-energy industrial goods saw growth of 1.6% and 1.16%, respectively.

In July, the European Central Bank announced an interest rake hike for the first time in 11 years. The regulator vowed further interventions in the coming months, despite the risk of a recession.

Germany’s annual inflation hit 8.5% in July, following a slight decline during the previous month. Inflation rates in France and Italy were 6.8% and 8.4%, respectively. The Baltic states are still among the worst-hit, with Estonia seeing inflation of 22.7%, Lithuania 20.8%,and Latvia 21%.