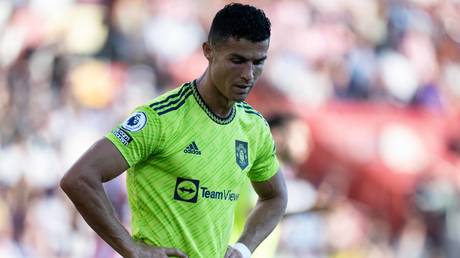 Borussia Dortmund are the latest team to be linked to the Portuguese star Ronaldo is still hoping to secure a late move from Old Trafford. © Sebastian Frej / MB Media / Getty Images

Hours after it emerged that Cristiano Ronaldo was reportedly interested in a move to Bundesliga giants Borussia Dortmund, the German club appear to have slammed the door on any potential transfer after the side’s chief executive told the media to “stop talking about it”.

Portuguese ace Ronaldo has been agitating for a move away from Old Trafford for several weeks after making clear to Manchester United brass that he was pursuing Champions League football.

But despite the best efforts of his agent Jorge Mendes, several of Europe’s elite clubs such as Chelsea, Bayern Munich, Paris Saint-Germain and Atletico Madrid have distanced themselves from a making a move for the soon-to-be 38-year-old star.

It is thought that Ronaldo’s wage demands are a considerable stumbling block and have impeded his Old Trafford exit, even after new boss Erik ten Hag reportedly gave his blessing to Ronaldo leaving the club after previously saying that he was integral to his plans. 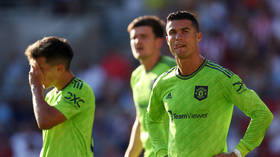 However, United’s disastrous start to the current English Premier League season is thought to have hastened the desire to move on from the multiple-time Ballon d’Or winner amid reports that he has become a negative influence in the dressing room.

It emerged on Thursday that Ronaldo had identified Borussia Dortmund as a potential landing spot. The Bundesliga side lost their chief goalscoring outlet Erling Haaland to Manchester City this summer, and Ronaldo has still proved to be a potent force in front of goal – and they are one of the potential destination who could offer Champions League football.

Read more:   Japan could be forced to toss out MILLIONS of vaccine doses due to shortage of suitable syringes

And while he said he found the idea of Ronaldo arriving in Dortmund as charming, chief executive Hans-Joachim Watzke said that there has been contact between his side and Ronaldo’s reps and advised the media to stop building up any potential deal.

“I love him as a player, it’s certainly a charming idea to see Cristiano Ronaldo play at Signal Iduna Park,” he said.

“But there is no contact at all between the parties involved. So from now on, you should stop talking about it.”

The English transfer window slams shut at 11pm on September 1, leaving Ronaldo with a narrowing window in which to identify a new club. Otherwise, he might be faced with the possibility of returning to a Manchester United side who ostensibly don’t want him to play in a tournament, the Europa League, in which he does not want to play. (RT)