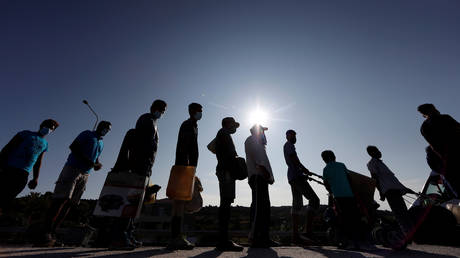 Refugees and migrants from the destroyed Moria camp line up to enter a new temporary camp, on the island of Lesbos, Greece, September 23, 2020. ©  REUTERS/Yara Nardi

“At first glance, it seems that the European Commission still does not understand that the solution to illegal migration is to stop illegal migrants when they arrive on European soil,” Babis said.

On Wednesday, Brussels proposed a new “flexible” migration policy. The member states would be given options to admit “some” asylum seekers relocated from other EU countries, to “sponsor” the return of rejected asylum seekers to their countries of behalf of other member states, and to help with “operational” measures.

EU Home Affairs Commissioner Ylva Johansson explained that the scheme will provide “clear, fair and faster border procedures so that people do not have to wait in limbo.” She said Europe should “aim to have legal pathways for more migrants and more refugees.”

The strategy should look like this – the people coming from these countries, they should be stopped and turned back to their countries and be given help there.

The Czech PM said that Europe should focus on strengthening border protection, rather than forcing those states refusing to accept migrants to pay for the repatriation of rejected asylum seekers. “This is essentially nonsense, because if we don’t accept migrants, we can’t return them.” (RT)