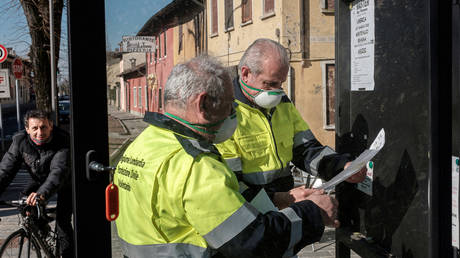 Italy’s health minister has said that neighboring countries will not close their borders, amid an outbreak of the deadly COVID-19 coronavirus. It comes as Rome confirmed 11 people dead in the epidemic, with hundreds infected.

“We agreed to keep borders open, closing borders would be a disproportionate and ineffective measure at this time,” Health Minister Roberto Speranza told reporters in Rome on Tuesday.

Four more people infected with the deadly virus died in northern Italy on Tuesday, bringing the death toll in the Mediterranean country to 11. Three of the dead were in their eighties and came from Lombardy, the worst affected region of Italy, Civil Protection agency chief Angelo Borrelli told reporters. The fourth was from the Veneto region.

Alongside the three fatalities, Italian authorities confirmed more than 90 new cases of the illness on Tuesday, bringing the total number of cases in Italy to 322.

Nearly a dozen towns have been quarantined across the northern Italian regions of Lombardy and Veneto, and supplies across the north have run low. Public events have been cancelled, and panicked shoppers have stripped supermarket shelves of provisions. (RT)