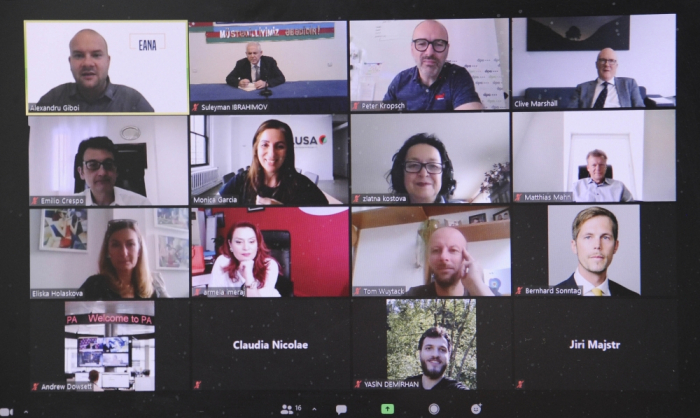 The European Alliance of News Agencies (EANA) has hosted an online webinar on the theme “The activities of news agencies during the post-COVID period”.

Addressing the event, on behalf of the EANA leadership and the staff of the Press Association, EANA Board Member, CEO of UK’s Press Association Media Group Clive Marshal extended deep condolences to AZERTAC Chairman of Board Aslan Aslanov for the tragic death of AZERTAC’s correspondent Maharram Ibrahimov, cameraman of Azerbaijan Televesion Siraj Abishov and a local official Arif Aliyev in the explosion of an anti-tank mine in the liberated from occupation Kalbajar district.

Press Association Group CEO Clive Marshall noted that the lives of journalists are at risk in many conflict zones around the world. He expressed his regret, saying even in peacetime, media professionals face unexpected deaths. Maharram Ibrahimov and his colleagues also faced such a tragedy. “They lost their lives by heroically fulfilling their professional duties,” he added.

Read more:   Spain WILL NOT ban hydroxychloroquine, unlike other European nations spooked by reported side effects

The event was followed by a Q&A session.