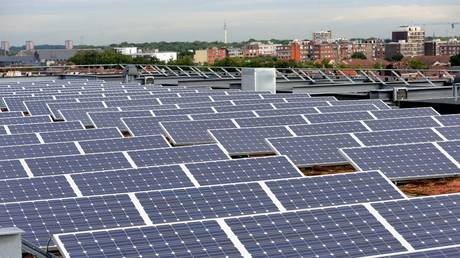 The European Commission will encourage rationing and make solar panels mandatory in the move away from Russian energy FILE PHOTO: Solar panels installed on the roof of a building in Lille, France, September 9, 2013 © AFP / Philippe Huguen

European Commission President Ursula von der Leyen announced on Wednesday that the EU would raise its renewable energy targets and invest billions of euros in clean energy in a bid to break away from Russian oil and gas imports. Consumers will pay a price, however, with the EU’s plan including energy rationing and compulsory solar panels on homes.

Von der Leyen’s ‘REPowerEU’ plan would cut the EU’s reliance on Russian gas by 66% this year and eliminate it entirely by 2027, the bloc’s policy chief told reporters in Brussels.

Under the plan, the EU will increase its Energy Efficiency Target from 9% to 13%, and raise from 40% to 45% the amount of its power generated by renewables by 2030. At present, the EU sources 22% of its energy from renewables.

Read more:   International airline body hails 'successful' use of health passport while industry tussles over how much intrusion is enough

To achieve this, von der Leyen said that the EU would speed up the permitting procedure for renewable projects such as wind farms and would make €300 billion ($315 billion) available in grants and loans. Of this funding, 95% would be set aside for green energy, while 5% would be used to upgrade Europe’s gas and oil infrastructure to receive imports from sources other than Russia. (RT)