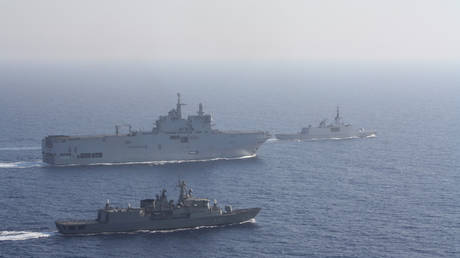 Greek and French vessels sail in formation during a joint military exercise in Mediterranean sea, in this undated handout image obtained by Reuters on August 13, 2020. © Reuters / Greek Ministry of Defense / File Photo

A European Union summit this week could provide an opportunity to reset relations between Turkey and the EU, Ankara has said, adding it expects Brussels to produce specific proposals and a timetable to work on a roadmap together.

“I believe the EU summit has a chance to have a reset in Turkey-EU relations. It is an important opportunity,” Ibrahim Kalin, President Recep Tayyip Erdogan’s spokesman, told Reuters on Monday. “And I see this willingness on the part of many EU member countries.”

Kalin warned EU officials that they “also have to understand that they cannot expect Turkey to do everything,” adding that “it must be a mutual process.”

EU leaders will discuss relations with Ankara at their summit during the first two days of October. Turkey and the EU have long been at loggerheads over a number of issues, including migration and Ankara’s involvement in Syria and Libya. Cyprus had also urged the EU to impose sanctions on Turkey over what it sees as Ankara’s violation of Cypriot sovereign rights in the Eastern Mediterranean. (RT)