If new restrictions target the energy sector, there will be no backing from Hungary, a senior official has said FILE PHOTO. An employee loads an oil transport truck in the Duna oil refinery, in Szazhalombatta, Hungary. © Janos Kummer/Getty Images

Budapest will not support any new anti-Russian sanctions proposed by the EU if they target Russian energy, a senior official in the government of Hungarian Prime Minister Viktor Orban has warned.

“Hungary has done a lot already to maintain European unity but if there are energy sanctions in the package, then we cannot and will not support it,” Gergely Gulyas, Orban’s chief of staff, told journalists during a briefing on Thursday.

“We are waiting for a final, full list of sanctions and then we can negotiate about it,” he added. “Hungary cannot support energy sanctions.”

Read more:   $1bn worth of cocaine seized at Philadelphia port

Gulyas was referring to the eighth package of sanctions that EU members are currently debating. The official reiterated his government’s criticism of Brussels’ policy. 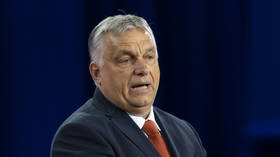 The restrictions imposed on Russian trade have failed to put an end to Moscow’s military operation in Ukraine, he said. They also hurt European nations worse than they did Russia, contrary to what the EU leadership promised, he added, citing surging energy prices and the profits that Russia has raked thanks to them.

Hungary is heavily dependent on Russian energy supplies and has been resisting Brussels, as it pressured member states to decouple their economies from the source. Budapest secured a waiver for itself when an embargo on importing Russian oil was included in one of the previous rounds of sanctions in May.