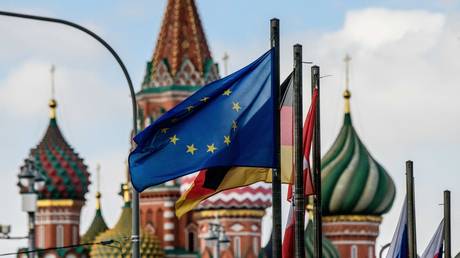 The European Union flag flies among others in front of St. Basil’s Cathedral in Moscow, March 2018. © Mladen Antonov / AFP

Foreign Minister Sergey Lavrov has dismissed recent EU complaints concerning Moscow’s retaliation against sanctions imposed on Russia, calling out officials in Brussels as being possessed by feelings of impunity.

Foreign restrictions placed on Russian citizens and entities are “groundless and illegitimate” and “will not be left unanswered,” Lavrov said during a trip to Armenia on Thursday.

In retaliation for several rounds of sanctions imposed against Russian officials, Russia’s Foreign Ministry announced on April 30 that it was blacklisting eight European officials, including European Parliament chief David Sassoli and European Commission Vice President for Values and Transparency Vera Jourova. Top EU diplomat Josep Borrell slammed Moscow’s declaration of the travel ban against the Europeans as “unacceptable, devoid of any legal justification and baseless.”

Lavrov said that Moscow targeted only those Europeans who “played a decisive role in yet another wave of sanctions against our officials, including lawmakers.” (RT)