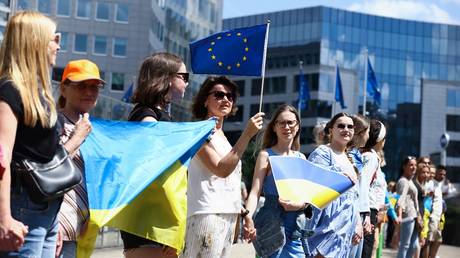 Demonstrators hold Ukrainian flags during a rally outside the headquarters of the European Commission in Brussels. ©  AFP / Kenzo Tribouillard

Despite declining numbers, however, measures to help Kiev still “remain popular” in the bloc, a study says Demonstrators hold Ukrainian flags during a rally outside the headquarters of the European Commission in Brussels. © AFP / Kenzo Tribouillard

There’s been a drop in support for sending weapons to Ukraine and accepting refugees from the country among the EU public, a survey by Eupinions pollster has revealed. However, measures to help Kiev in its conflict with Moscow are still supported by the majority of respondents, the study shows.

The results of the poll, which was conducted throughout June in 27 member states, were released on Wednesday.

They showed that 60% of the EU’s population were on board with sending weapons to Kiev. The backing for lethal aid was the highest in Poland, where 84% spoke in favor of it; and the lowest in Italy, where it was supported by just 42%.

“In fact, Italy is the only member state where a majority of citizens oppose the delivery of weapons,” the study pointed out.

Meanwhile, 60% of those surveyed believed that the shipments of arms to Kiev should be organized through EU mechanisms, while 54% preferred them to be carried out by their home countries.

A similar poll, which was published by Eupinions in May and reflected the mood from March, showed that 64% in the bloc were in favor of arms deliveries. 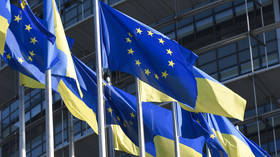 Moscow has consistently criticized the US, EU and some other countries over their shipments of weapons to Kiev, arguing that they only prolonged the fighting and increased the risk of a direct confrontation between Russia and NATO.

Ukraine was granted EU candidate status shortly after the outbreak of the conflict, with 66% of the population in member states now saying they would like to see Kiev joining the union.

The respondents were also asked to name the country they thought was the EU’s most trustworthy ally, with 77% saying that it was the US.

As for the economic fallout of the sanctions imposed on Moscow by Brussels, Eupinions pointed out that 46% of EU citizens said their personal outlook on the future was negative, compared to 37% at the same period last year.

Overall, the authors of the study came to the conclusion that “measures to support Ukraine in its defense against the war waged by Russia remain popular” in the EU. (RT)