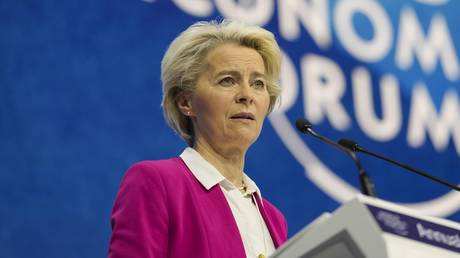 European Commission President Ursula von der Leyen on Tuesday accused Russia of “blackmailing” the EU with its oil and gas exports. However, the bloc is in the process of voluntarily cutting itself off from these energy resources, and Moscow has blamed global food shortages on Western sanctions.

Speaking at the World Economic Forum’s annual meeting in Davos, Switzerland, von der Leyen said the EU would “accelerate” its transition to green energy “because of Russia’s blackmailing us with fossil fuels.”

Yet hours before she spoke, German Economy Minister Robert Habeck announced that the EU’s 27 member states would “reach a breakthrough within days” to ban Russian oil imports, upon which many EU states depend. Germany, for example, relies on Russia for around a quarter of its imported oil, while the bloc as a whole sources 27% of its oil from Russia. (RT)