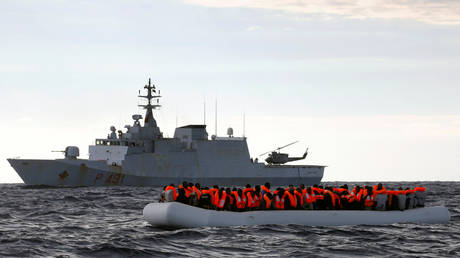 FILE PHOTO: An overcrowded raft carrying African migrants is seen in front of an Italian Navy vessel in 2017 © REUTERS/Yannis Behrakis

Brussels has failed to revive an EU-led naval mission to uphold the arms embargo on Libya, with some dissenting voices in the bloc arguing that the ships’ presence would attract migrants setting out from African shores.

EU foreign ministers are unlikely to support the return of Operation Sophia – a maritime mission in the Mediterranean launched in 2015 to enforce the embargo – during a meeting on Monday, Europe’s foreign policy chief Josep Borrell acknowledged.

Also on rt.com UN deputy envoy to Libya at Munich conference: Ceasefire hangs by thread & arms embargo is a ‘joke’

“I don’t think today we are going to be able [to reach an agreement],” Borrell said, expressing hope that disagreements could instead be resolved by the next meeting in March.

Multiple countries had “some final reluctance,” he explained, without going into details. While Borrell said the situation on the ground in Libya “is very, very bad,” humanitarian considerations don’t seem to play a big part in the EU’s rationale. (RT)

New summer 2021 dates have been confirmed for the postponed Tokyo 2020 Olympic Games. The…