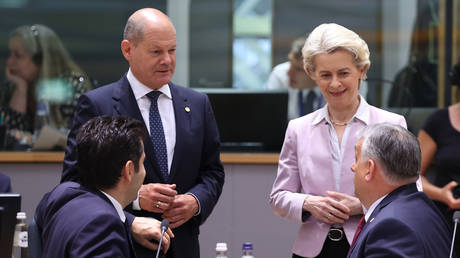 Hungary could veto the proposed ninth package of EU sanctions against Russia, amid a row over funding for Budapest being withheld by Brussels, the Financial Times reported on Thursday, citing sources.

“They are being difficult wherever they can,” a senior EU official claimed in a comment to the newspaper about a series of meetings in Brussels earlier this week. “It is becoming rather predictable.”

On Wednesday, the European Commission proposed a new round of restrictions against Moscow over its military operation in Ukraine. The package includes almost 200 individuals and entities slated for the EU’s blacklist, Commission President Ursula von der Leyen said.

Diplomats told the FT that Hungary could “take hostage” all upcoming decisions that require unanimous support. The country reportedly forced the postponement of a vote on borrowing $18 billion for Ukraine earlier this week.

Hungary’s critics claim that Prime Minister Viktor Orban is abusing EU membership privileges to put pressure on Brussels over its refusal to unfreeze €5.8 billion ($6.1 bn) in Covid-19 recovery funds meant for Hungary. The money was put on ice over the EU leadership’s assessment that Budapest was failing to fulfil its rule of law obligations. 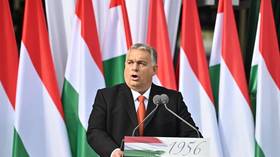 Last week, the European Commission said the funds will remain frozen until Hungary fully implements promised judiciary and anti-grift reforms. The EU executive branch also suggested suspending the payment of an additional €7.5 billion ($7.9bn), which Hungary would have received as part of programs aimed at evening up living standards across the bloc. The EU is to vote on the matter on December 19.

The FT claimed Orban was acting like the Grinch spoiling Christmas for other EU members, by playing a “game of chicken” with them. Budapest could also veto the expansion of the Schengen zone to Croatia, Romania and Bulgaria, the newspaper suggested, claiming that “nothing can be excluded” at this point.

The Orban government has been highly critical of Brussels’ approach to the Ukraine conflict, particularly the sanctions regime. The EU “shot itself in the lungs” by cutting trade with Russia and causing a surge in energy prices and inflation at home, he assessed.

Budapest has also insisted that Brussels focus on reaching peace between Moscow and Kiev. Hungary has broken ranks with other Western states by refusing to send weapons to Ukraine or train its troops. (RT)