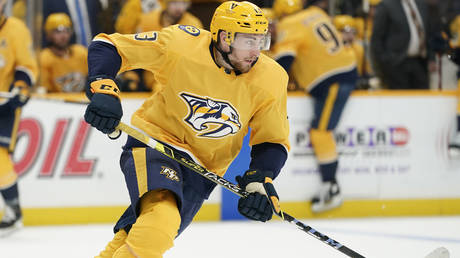 Russia's Yakov Trenin is among those hoping to play in Prague. ©  AP Photo / Mark Humphrey

Several Russian players are due to feature in the Czech Republic as part of the NHL’s Global Series Russia’s Yakov Trenin is among those hoping to play in Prague. © AP Photo / Mark Humphrey

Czech Foreign Minister Jan Lipavsky has warned that Russian ice hockey players could still be prevented from entering the country for two NHL games which are set to take place in Prague next month.

NHL teams the San Jose Sharks and the Nashville Predators are due to play each other in the Czech capital on October 7 and 8, as part of the NHL’s 2022 Global Series which will open the new season.

Both teams have Russian stars on their rosters, with Alexander Barabanov and Evgeny Svechnikov on the books at San Jose and compatriots Yakov Trenin and Egor Afanasyev at the Predators.

The Czech government has already warned the NHL that it will not issue new visas to Russian players as part of the broader travel sanctions against the country. 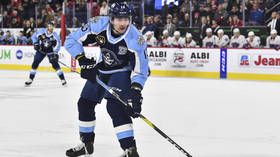 Czech Foreign Minister Lipavsky said on Monday that if Russian players had valid Schengen visas which were granted previously, they could still enter – although that situation could change.

“It is true that Russian players should not obtain visas within the Schengen area. If they already have valid visas, they should be allowed in, but given the ongoing negotiations, there may still be changes in this matter,” Lipavsky was quoted as saying by national media.

San Jose general manager Mike Grier said last week that if his team’s Russian contingent was prevented from playing in Prague, they could boycott the games.

“We’re a team, so, if they say some guys can’t go over then, either we all go or no one goes,” Grier warned.

The Czech Republic, Latvia, Sweden, and Finland are among the countries to declare that any of their citizens who play for teams in the Russia-based KHL (Kontinental Hockey League) will no longer be considered for national team selection.

Legendary Czech former goaltender Dominik Hasek has previously called on the NHL to suspend all of its Russian players, which would see the likes of Washington Capitals star Alexander Ovechkin and dozens of others barred from competing.

Failing that, Hasek said Russian hockey stars should “donate every dollar from your contract to a humanitarian aid to the Ukrainian people.”

The NHL suspended its agreement with the KHL and other business partners in Russia back in March, but has shown no appetite to impose any kind of sanctions on Russian players who feature in the elite North American league. (RT)