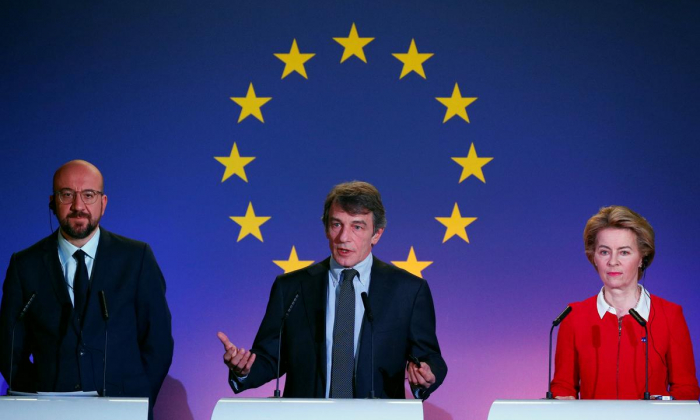 The leaders of the European Union’s three institutions warned Britain on Friday that it cannot expect “the highest quality access to the single market” unless it adopts the bloc’s standards on environment, labor, taxation and state aid, according to Reuters.

“Without being a member, you cannot retain the benefits of membership,” they said in an op-ed published by several European media on Friday, ahead of Britain’s exit from the EU at midnight in Brussels (2300 GMT).

Read more:   Managing director: TAP is one of most ambitious projects in oil and gas industry

Britain will no longer be an EU member state from Saturday, but it will enter a transition period until the end of December that is meant to give citizens and businesses time to adapt while an agreement is hammered out on the shape of the future relationship.

Trade, fishing rights and a raft of other issues are up for discussion.

Although the aim is to achieve a “zero tariff, zero quota” trade deal, the EU says that would also require “zero dumping”.

It will insist that Britain remain aligned on standards and regulations to guarantee fair competition, but London has already indicated it will not be “a rule taker”.

During the transition period, Britain will continue to apply EU laws but will no longer be represented in EU institutions, and British diplomats in Brussels will have to surrender passes giving them access to the European Council.

EU officials were reminded this week, ahead of Britain’s exit, that they should not disclose confidential information about the bloc’s business.

A group of Brexit Party members of the European Parliament left the bloc’s Brussels assembly triumphantly on Friday, cheering and holding Union Jack flags as a kilted Scottish bagpiper played.

“Today we celebrate the beginning of our independence,” Ann Widdecombe told onlookers before she and the group headed to the railway station to take the Eurostar to London.

Brexit Day will be more muted in Brussels than across the Channel, where its supporters in London’s Parliament Square will celebrate their victory 3-1/2 years after the referendum in which Britons voted by 52% to 48% to leave the EU.

A Union Jack in the building of the European Council in Brussels will be lowered at 7 p.m. local time (1800 GMT) on Friday, and put away with the flags of non-EU countries.

The European Parliament plans to place one of its British flags in the House of European History, a nearby museum that recounts the history of Europe since 1789.

At the UK’s Representation Office in Brussels, the EU flag will be lowered at the end of the working day, and on Saturday, the name plate outside the building will be replaced.

It will now be known as the UK Mission to the European Union, which some have already dubbed “UKmissEU”.