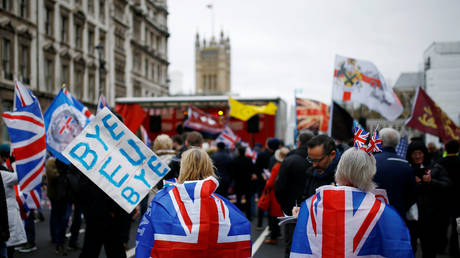 The EU has activated a legal process against the UK after it failed to amend its controversial ‘Internal Market Bill’ which Brussels considers inconsistent with the previously agreed Brexit withdrawal agreement.

European Commission President Ursula von der Leyen said Thursday that Brussels had sent a formal letter of notice to the UK and that London had until the end of September to remove the “problematic parts” of its draft Internal Market Bill, including the part on the Irish border issue.

This draft bill is by its very nature a breach of the obligation of good faith laid down in the Withdrawal Agreement. Moreover, if adopted as is, it will be in full contradiction to the Protocol on Northern Ireland.

“The deadline lapsed yesterday,” von der Leyen said, explaining that the letter of formal notice to the British government was the first step in launching the infringement procedure.

Read more:   Foreign Ministry: Azerbaijan firmly supports all steps of brotherly Turkey to ensure peace and stability in the region

“The Commission will continue to work hard towards the full and timely implementation of the Withdrawal Agreement. We stand by our commitments,” she said.

The UK government now has a month to reply to the complaint. The EU will then assess Britain’s arguments once more and may ask it to amend the bill again. If London refuses again, the EU could sue the UK at the Luxembourg-based European Court of Justice. (RT)