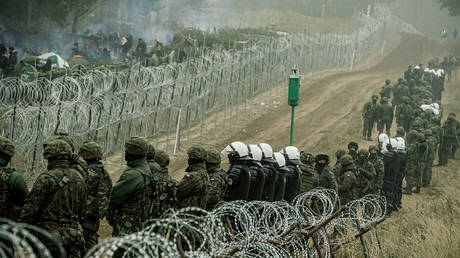 FILE PHOTO: Polish soldiers and police watch migrants at the Poland/Belarus border near Kuznica, Poland, in this photograph released by the Territorial Defence Forces, November 12, 2021. © Irek Dorozanski / DWOT/Handout via REUTERS

Alleged attempts by Belarus’ embattled leader Alexander Lukashenko to weaponize thousands of desperate migrants as part of an effort to put pressure on the EU have failed to divide its members, the bloc’s chief has insisted.

Speaking on Sunday during an official visit to neighboring Lithuania, which has seen a sharp rise in illegal crossings in recent months, European Commission President Ursula von der Leyen reassured the Baltic States, as well as Poland, that Brussels is maintaining “full solidarity” with them amid the current humanitarian situation unfolding on their borders.

According to her, EU support includes equipment to manage their frontiers effectively, and the former German defense minister pointed out that Brussels had tripled funding for the three countries to €200 million in 2021 and 2022. (RT)