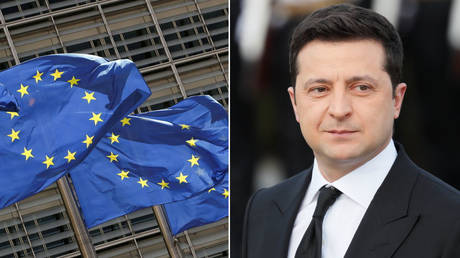 Ukraine’s long-standing ambition to join the EU is being held up by concerns from member states, with Brussels’ top leadership no longer able to help map out a route to it being admitted, President Volodymr Zelensky has said.

Speaking to Kiev-based ICTV channel on Monday, the Ukrainian president lamented that it is not worth even asking questions about membership, given that he and his advisers already know what the answers will be.

Also on rt.com Zelensky accuses America of paying for NS2 pipeline with Ukrainian lives & blasts Biden for not meeting him before Putin summit

Zelensky also argued that if Ukraine’s accession to the EU was down to a decision made by authorities in Brussels alone, then the country would already have joined the combined 27 member states “yesterday.” However, the issues that face Kiev’s attempts are down to other individual countries not giving their consent, he added, and out of the control of top Eurocrats.

“When you see them face to face, they say they are in your favor but there are questions from some other countries,” he added. Kiev is preparing to formally apply for EU membership in 2024, with the hope of finally officially joining in the 2030s.

Seven of the EU’s member states are now set to support the induction of Ukraine, although another 20 countries have still not declared their willingness to do so. Kiev has embarked on a series of reform efforts in the hope of meeting the criteria. (RT)