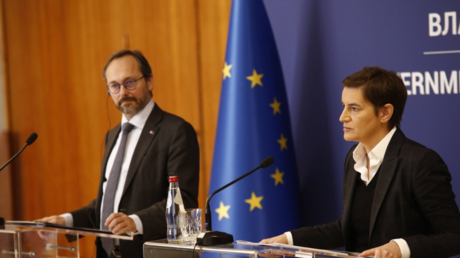 Belgrade is expected to sanction Russia over Ukraine’s integrity, but give up its own in Kosovo © Twitter / EGiaufretEU

The EU is making demands of Serbia that contradict each other when it comes to values and principles, Serbian Prime Minister Ana Brnabic said on Friday. While Belgrade is committed to joining the bloc, it’s difficult to square the insistence of Brussels on Ukraine’s territorial integrity while expecting Serbia to violate its own.

Brnabic spoke with reporters in Belgrade following her meeting with Emanuele Giaufret, the head of the EU mission in Serbia. At one point, she was asked to address the “recommendations” recently adopted by the European Parliament.

“One recommendation says Serbia can become an EU member only if it agrees to sanction Russia, because Russia violated the territorial integrity of an internationally recognized state,” said Brnabic. “But the other recommendation is that we can continue on our European path only after giving up our own territorial integrity,” that is, by recognizing the independence Kosovo’s provisional government declared in 2008.

If territorial integrity is inviolable, why is Serbia being asked to violate its own, asked Brnabic in return.

So bringing up the inviolable territorial integrity of internationally recognized states such as Ukraine or Serbia, in the recommendations of certain MEPs, is completely contradictory in terms of values.

Making such demands “does no favors to our European path, or to EU enlargement,” nor do they increase the EU’s popularity in Serbia, she added. 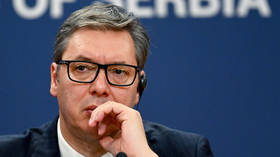 Brussels has pressured Serbia since February to “harmonize its foreign policy” with the EU and impose sanctions on Russia over the conflict in Ukraine. Serbian President Aleksandar Vucic has repeatedly defended his policy of independence and neutrality. Serbian public opinion is overwhelmingly opposed to sanctioning Russia, or joining the EU if it means giving up Kosovo.

Despite “certain disagreements,” Serbia will “continue to gradually harmonize and promote European values,” Brnabic said. “We are devoted to EU membership and think the Union is the best place for our citizens and the economy.”

Giaufret told reporters that Serbia’s progress depends entirely on “rule of law” reforms and the outcome of talks with Kosovo. (RT)