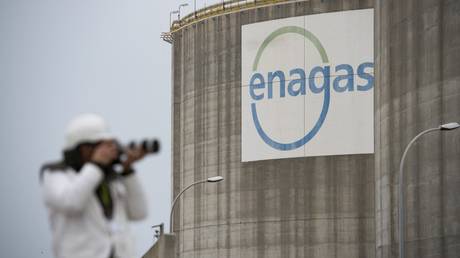 Spain, Greece and Portugal have all come out against Brussels’ plan to lower consumption by 15% A gas storage container at the Enagas regasification plant in Barcelona, Spain, March 29, 2022 © AFP / Josep Lago

The governments of Spain, Greece and Portugal have all stated that they oppose an EU scheme that would see them slash their natural gas consumption by 15% over the winter.

Announced by the European Commission on Wednesday, the ‘Save Gas for a Safe Winter’ proposal would entail EU member states reducing their gas use by switching to other power sources and ordering their citizens to ration their own usage. If the commission’s proposal is adopted, member states would be required to report on their progress toward the 15% target every two months, and EU authorities would have the power to declare a state of emergency and make the reduction mandatory.

“I deeply regret to say that Spain does not support this proposal,” Spanish Energy Minister Teresa Ribera said shortly after its announcement. Mentioning that the plan had been revealed without a debate in the European Council, Ribera declared that the commission “cannot demand a sacrifice” when “they have not even asked our prior opinion.”

“Unlike other countries, we Spaniards have not lived beyond our means in terms of energy,” Ribera added. (RT)

The US aims to strengthen its military ties with New Delhi, accusing Beijing of challenging…

18:39 Moscow tells US to ‘back off’ with ‘aggressive’ course

18:39 Tickets for bus trips to Shusha, Aghdam and Fuzuli for October to go on sale

18:26 “We are in favor of recovery of this region from difficult situation it was in for 30 years” – Azerbaijani President

17:39 Russian tennis stars on the rise after title successes

17:13 EU leaders have forgotten about something kind of important

16:52 West should treat us with respect – Putin

16:52 List of journalists included in media register in Azerbaijan to be publicly available

16:39 Border Service: About 17,000 Russians arrived in Finland over weekend

16:13 Armored personnel carrier with military spotted on Russian side of Georgian border

15:59 Government mortgage lending up 1% in Azerbaijan

15:52 Baku to host International Association of Prosecutors’ Annual Conference in 2024

15:52 Russia and the US still have time to learn the lessons of the Cuban missile crisis and prevent a nuclear war

15:42 Another 379 mines buried by Armenians discovered in Kalbajar

15:39 Another 190 mines found in liberated territories of Azerbaijan