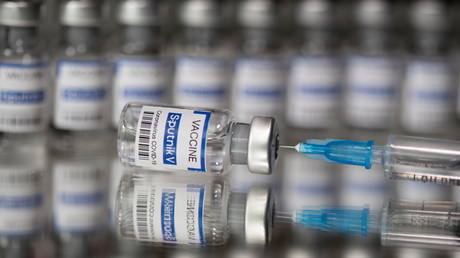 Brussels’ top diplomat in Moscow has claimed that any politicization of the Russian-made Sputnik V vaccine is the fault of the Kremlin, not of EU officials, despite a months-long delay in approving the tried and tested formula.

On Friday, the bloc’s ambassador, Marcus Ederer, told Moscow daily RBK that any delays in approving the country’s vaccine aren’t the fault of Brussels, as its regulators have made regular attempts to inspect the production of the coronavirus vaccine, and Russia has repeatedly postponed.

The Russian Direct Investment Fund (RDIF), which financed the development of the jab, applied to the European Medicines Agency (EMA) for approval of Sputnik V back in January, and its head, Kirill Dmitriev, said that the vaccine could be recognized in fall this year.

Also on rt.com EU wants to agree on mutual recognition of Covid-19 certificates with Russia but Moscow has yet to apply, bloc’s ambassador claims

“The Russian side has repeatedly postponed the timing of the inspection requested by the EMA, which slows down the process. These are the facts. This is a technical, not a political process. When Russian officials talk about delays and about politicization on the European side, I sometimes think that they mostly talk about themselves, because they are the ones who politicize this issue,” said Ederer in the interview.

Read more:   EU secures purchase of 20,000 Remdesivir doses from US as countries run out of anti-Covid drug

The EU’s recognition of Sputnik V would allow member states to be able to buy up supplies, which a number had expressed interest in. Two countries, Hungary and Slovakia, even jumped the gun and began offering doses before Brussels’ regulator gave the green light.

Approval would also likely help open the door to mutual recognition of Covid-19 certificates that mean Russian and EU citizens are able to travel in and out of the regions without the need to isolate upon arrival. Sixteen countries outside of the EU have had their Covid certificates recognized so far, including North Macedonia, Israel and Turkey, with another 15 countries on the path to also achieve this.

“The Russian side has not yet prepared the necessary documents to be sent to the European Commission in Brussels. I regret this, because the mutual recognition of equivalence, including the recognition by Russia, in turn, of the EU’s digital Covid-19 certificates would definitely make life easier for people traveling both ways. After all, then travelers who have been vaccinated or have recovered from the coronavirus, which is also displayed in the certificate, would not be subject to quarantine measures in the respective countries,” Ederer added. (RT)