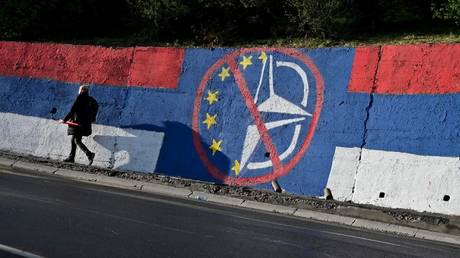 Aleksandar Vulin said that Serbs should accept that Brussels doesn’t want them and strengthen relations with Russia instead A pedestrian walks past an anti-EU and anti-NATO mural painting in Belgrade, Serbia, April 2, 2022 © AFP / Andrej Isakovic

The EU’s offers to Serbia are unacceptable, and Serbs should “accept that they don’t want us,” Interior Minister Aleksandar Vulin told the Novosti news site on Saturday. He added that Belgrade should instead turn its attention to “free countries that accept us without blackmail,” such as Russia and China.

“The question is not whether we want to join the EU, but whether the EU wants Serbia,” Vulin told Novosti. “Judging by the insane blackmail they are exposing us to…they don’t want us. The sooner we accept that they don’t want us and that we don’t belong there, the better off we will be.”

A traditional ally of Russia, Serbia has come under intense pressure from the West to back the sanctions regime against Moscow over its military operation in Ukraine. The European Parliament has considered freezing accession talks with Belgrade over the latter’s refusal to back its eight rounds of economic penalties, US state media reported last month, while Germany and France have offered to “accelerate” Serbia’s path to EU membership if it recognizes the independence of the province of Kosovo, Serbian President Aleksandar Vucic stated last week. 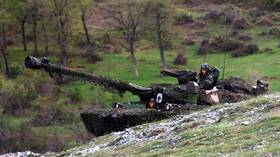 For Vulin and Vucic, the answer to these offers is a clear “no.”

“How much would our friends respect us if they saw us neglecting our interests in the face of enemy force?” Vulin asked. “Who would fight for us if we chose not to fight for ourselves?

“Relations with Russia, China and other free countries that accept us without blackmail and conditions are the future of Serbia,” he continued. “I believe that friendship with Russia is of the greatest importance and that without it we risk the physical disappearance of Serbia.”

According to a poll taken in March, some 61% of Serbs oppose any cooperation with the US-led NATO alliance, largely due to the bloc’s support for Kosovo’s independence and its 1999 bombing campaign that brought about the end of Yugoslavia. Furthermore, while Serbia applied for EU membership in 2009, accession looks to be off the table for now. The EU’s latest sanctions package targeting Russian oil exports looks set to cost Belgrade hundreds of millions of euros, Vulin said last week, describing it as the “first EU sanctions package against Serbia.”

Hungary has responded to the sanctions by announcing a new pipeline to help Serbia tap into the supply of Russian crude oil. (RT)