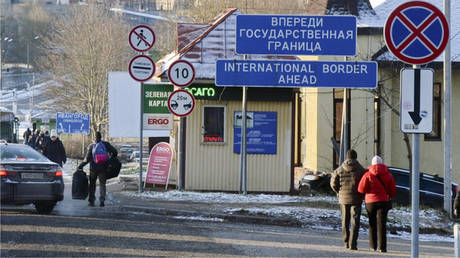 FILE PHOTO. Cars staying in the line to enter to the border station in Ivangorod, Russia. © Getty Images / Sergei Stepanov

Officials in Brussels are skeptical of Zelensky’s demand, now echoed by Estonia and Finland FILE PHOTO. Cars staying in the line to enter to the border station in Ivangorod, Russia. © Getty Images / Sergei Stepanov

Brussels seems reluctant to close EU borders to all Russian travelers, with one official telling the Financial Times on Tuesday that the bloc did not want a complete ban. This followed calls from leaders of Estonia and Finland to do so, echoing the demand by Ukrainian President Vladimir Zelensky. Moscow called the idea “irrational” and said implementing it would expose the EU’s true nature once and for all.

It’s “not right” that Russians “can live a normal life, travel in Europe, be tourists,” Finnish PM Sanna Marin told the state broadcaster Yle, accusing Moscow of waging “an aggressive, brutal war of aggression.” While Finland might introduce its own travel ban, Marin added that she would “personally like to see European solutions to this question as well.” (RT)