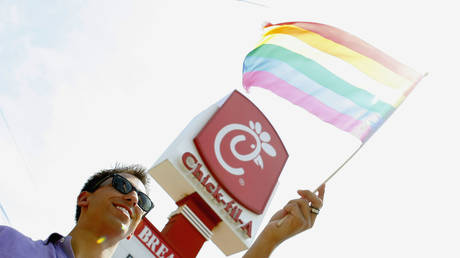 Being a fast-food company in 2019 America seems to be more about politics than fried chicken. Chick-fil-A’s decision to cave to liberal demands has angered its Christian customer fan base, while earning it no points with critics.

The Atlanta, Georgia-based company has been known as much for its fried chicken sandwiches as for its public embrace of Christian values – which led to boycotts and hostility from LGBTQ groups and social justice activists, but translated into growth and profits driven by loyal fans of both the food and the message.

“You too, Chick-fil-A?” was their collective response on Monday, when the company announced it will stop donating to the Salvation Army and Fellowship of Christian Athletes.

“Shame, shame on you,” wrote American Conservative’s Rod Dreher. “You had no reason to capitulate. But you did.”

Chick-fil-A was “backstabbing the people who made them successful,”said Dan Gainor, VP of the conservative media research outfit Newsbusters. Former Arkansas Governor Mike Huckabee called it a surrender to “anti-Christian hate groups.”

“The decision makes absolutely no sense,”tweeted YouTube host Dave Rubin – who is both liberal and in a same-sex marriage – adding that Chick-fil-A “was actually cool because it stood up to the progressive mind virus which is cancel culture.”

“I remember a lot of people going out on a limb to defend [Chick-fil-A]. Everyone stood by the company for standing by its values. That’s what makes today a bit of a sad day for so many people who saw the company as a beacon of hope in a messed up culture,”wrote author Billy Hallowell.

Others, like Congressman Chip Roy (R-Texas), wondered whether the chain will start working on Sundays next.

Known as Chick-fil-A since 1967, the company has made a big deal out of staying loyal to Southern Baptist values of its founder, S. Truett Cathy, meaning it was closed on Sundays, among other things.

It ran afoul of the LGBTQ activists back in 2012, when they accused it of donating to charities that opposed same-sex marriage. CEO Dan Cathy responded that the company’s intent was “not support political or social agendas,” but it faced boycotts and protest campaigns anyway.

Also on rt.com Chick-fil-A sales have more than doubled since LGBT boycott began

By the end of 2018, Chick-fil-A had $10.5 billion in revenue and was the third-largest US chain – behind only McDonald’s and Starbucks, even though they had many more locations. (RT)