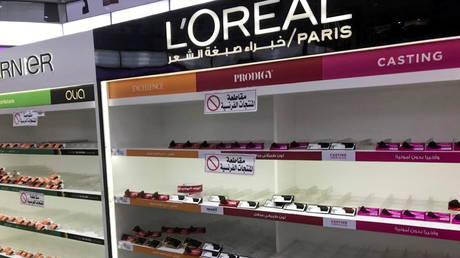 Turkey’s president has urged his compatriots to “never” buy French products amid the ongoing row over Paris’ hardened stance on radical Islam. Some French companies have already vowed to not give in to Muslim “blackmail.”

Recep Tayyip Erdogan doubled down on his accusations against France on Monday, officially calling for a boycott of French goods.

“Just like they say, ‘Don’t buy good with Turkish brands’ in France, I am calling to all my citizens from here to never help French brands or buy them,” Erdogan said, again questioning the “mental health” of President Emmanuel Macron. Turkey’s leader already targeted the French president over the past few days and the offensive remarks have prompted Paris to recall its ambassador from Turkey.

Also on rt.com France recalls ambassador from Turkey after Erdogan urges Macron to seek ‘mental help’ over his attitude towards Muslims

It’s quite hard to predict whom will be hurt the most if Turkey actually sees through such a boycott. According to Turkey’s official statistics, France is the 10th biggest supplier of imported goods to the country and the 7th biggest market for Turkish exports. French cars, which are extremely popular in Turkey, are among the primary imported goods. (RT)