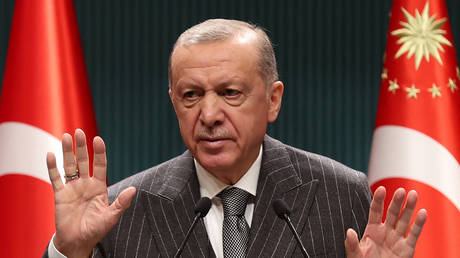 The vote in Donbass and two other regions is alarming, but if Vladimir Putin has a plan, he will stick to it, Türkiye’s President said Türkiye’s President Recep Tayyip Erdogan delivers a speech following a cabinet meeting in Ankara on September 26, 2022. © Adem ALTAN / AFP

Recent referendums in the Donbass republics and two Ukrainian regions on joining Russia are of great concern, and it would be better to “solve this problem diplomatically,” Türkiye’s President Recep Tayyip Erdogan told local media on Wednesday.

In an interview with CNN Türk on Wednesday, Erdogan sounded the alarm over the public vote, adding that dialogue would be a preferable option in tackling this issue.

“The decision to hold referendums in some occupied regions of Ukraine is quite worrying… There may be an annexation here,” he said, adding that “if Putin, whom I know, has put something in his head, he will do it.”

Erdogan said that Ukrainian President Vladimir Zelensky had asked for Türkiye’s diplomatic support on the issue of the referendums. “[He] wants us to convince Putin. I intend to discuss these issues in detail with Putin tomorrow [on Thursday],” he said.

He also noted that another major issue on the agenda would be the UN- Türkiye-brokered deal which unblocked Ukrainian grain exports via the Black Sea. According to Erdogan, 80% of grain shipments from Ukrainian ports “unfortunately went to rich countries.”

“This has been a serious concern for Putin. We hope that we will be able to send it to poor countries and achieve the result,” he added.

However, on Wednesday, Kremlin spokesman, Dmitry Peskov noted that the Russian leader has no talks scheduled with Erdogan.

During the interview, Türkiye’s president also stressed that a possible nuclear war would be “catastrophic.” “One should not even think about this, let alone talk about it. Solving this issue through diplomacy would be the most appropriate step,” he said.

This was an apparent reference to the warning the Russian leader issued to the West last week, saying that those who use nuclear blackmail against Moscow “should know that the wind can turn around.”

Last week, Erdogan claimed that Ukraine and Russia may reach a peace settlement only if Moscow returns to Kiev all the lands that it has captured since the beginning of the military operation in late February.

During the referendums that were held between September 23 and 27, the Donetsk and Lugansk People’s Republics along with Kherson Region and part of Zaporozhye Region overwhelmingly voted to join Russia. (RT)