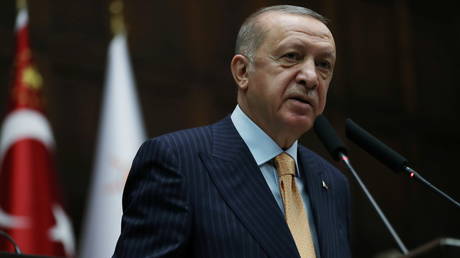 The Turkish president has claimed that Europe is returning to the Barbarian period, citing Western interference and attacks on Muslim values as he continues his feud with European leaders over Prophet Mohammed cartoons.

Speaking in parliament on Wednesday, Turkish President Recep Tayyip Erdogan slammed European interference in the Muslim world and hit out at flagrant disrespect towards Islam.

Erdogan contended that the hateful, anti-Islam policies of Macron and the republication of Charlie Hebdo’s caricature of the Prophet Mohammed were a sign that Europe is returning to barbarism.

Erdogan condemned European intervention in Lebanon, Algeria and Rwanda. He claimed that Europe has invaded “every country” in Africa to look for “diamonds, phosphate and gold.”

“You are the murderers,” he declared. (RT)