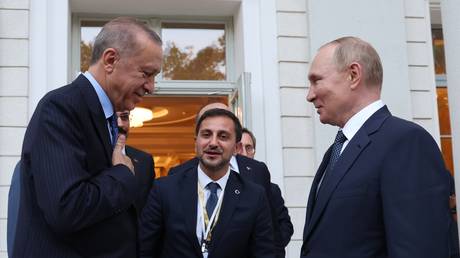 While Turkey is a NATO member, its president has walked a middle path on Ukraine Vladimir Putin (R) and Recep Tayyip Erdogan (L) thank each other after their talks in Sochi, Russia, August 5, 2022 © AP / Vyacheslav Prokofyev

Six unnamed Western officials told the newspaper that they were “concerned” about the plans of Russia and Turkey to cooperate on trade and energy. One EU official said that Brussels was monitoring relations between Ankara and Moscow “more and more closely,” given how Turkey seems to be “increasingly” becoming a platform for trade with Russia.

Following a four-hour meeting with Putin on Friday, Erdogan welcomed Russia’s role in building a nuclear power plant in Turkey. The two nations aim for bilateral trade turnover of $100 billion, and are cooperating against terrorism and toward peace in Libya and Syria.

Putin pledged that Russia would supply Turkey with oil, gas and coal “without any interruptions,” after the two leaders agreed that Ankara would pay for some of this gas in rubles. 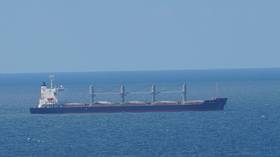 Another official told the newspaper that Erdogan’s behavior is “very opportunistic,” adding that “we are trying to make the Turks pay attention to our concerns.”

Although a NATO member since 1952 and an EU applicant since 1987, Turkey has broken with both blocs on several occasions, most recently over the conflict in Ukraine.

Erdogan has described his diplomacy with Kiev and Moscow as “balanced,” and has refused to sanction Russia over its military operation. Turkey is the only NATO country not to impose such penalties. (RT)