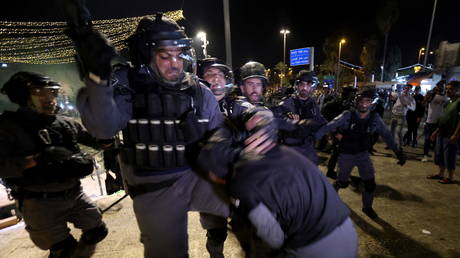 Israeli police scuffle with a Palestinian during clashes with Israeli police at Damascus Gate on Laylat al-Qadr during the holy month of Ramadan, in Jerusalem's Old City, May 8, 2021. ©  REUTERS/Ronen Zvulun

Turkish President Recep Tayyip Erdogan has issued a scathing denunciation of Israel following clashes between police and Palestinian demonstrators who are angry about planned forced evictions in annexed East Jerusalem.

On Friday, Israeli police used rubber bullets, tear gas and stun grenades on worshippers at Al-Aqsa mosque after the crowd began throwing chairs, rocks and shoes at them. More than 200 Palestinians were reportedly injured across Jerusalem during skirmishes with security forces. Dozens of people were hospitalized and seventeen officers were hurt in the clashes. The unrest continued into the weekend, with the Palestine Red Crescent reporting early Sunday that dozens of more people had been injured, including a one-year-old.

In a speech on Saturday, Erdogan said that the violence was an “attack on all Muslims” and called on the United Nations to put an end to the Palestinians’ “persecution.” (RT)