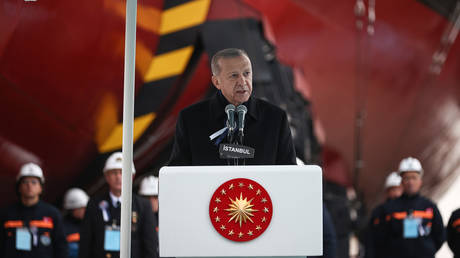 The Turkish president vowed to go after terrorists “no matter who they collude with” Turkish President Recep Tayyip Erdogan speaks during the launch ceremony of the third ship in Pakistan MILGEM Corvette Project, November 25, 2022 in Istanbul, Turkiye. © Emrah Yorulmaz / Anadolu Agency via Getty Images

Türkiye is determined to “root out” terrorists no matter where they are or who they ally with, President Recep Tayyip Erdogan declared on Friday. His comments come after Washington protested to Ankara about an airstrike that “directly threatened” US troops working with Kurdish militias in Syria, which Türkiye considers terrorists.

“No matter who terrorists collude with, Türkiye will always hold them accountable for every drop of blood they shed,” Erdogan said in a speech at the Istanbul Shipyard. The Turkish president joined Pakistani Prime Minister Shehbaz Sharif for the ceremonial inauguration of the ‘PNS Khaibar’, one of the four corvettes Islamabad has commissioned from Türkiye.

Erdogan also said that “no one can lecture Türkiye, which is the only NATO ally that fought Daesh hand to hand and was victorious,” referring to the terrorist group Islamic State (IS, formerly ISIS).

Since Sunday, Ankara has carried out air and artillery strikes, dubbed Operation Claw-Sword, in northern Syria and Iraq. Its targets are Kurdish militias that Türkiye holds responsible for the November 13 terrorist attack in Istanbul that killed six and wounded 81 people. On Wednesday, Turkish planes bombed a location just 300 meters from a US base near Hasakah, prompting the Pentagon to accuse Türkiye of endangering its troops and the fight against IS. 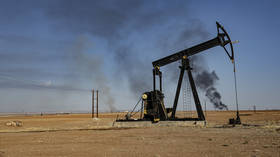 “Recent air strikes in Syria directly threatened the safety of US personnel who are working in Syria with local partners to defeat ISIS and maintain custody of more than ten thousand ISIS detainees,” said Pentagon press secretary Patrick Ryder. He added that continued escalation threatened the “years-long progress” of the US-led coalition.

Turkish Defense Minister Hulusi Akar responded on Friday by saying that Ankara is only targeting terrorists and that “it is out of the question for us to harm coalition forces or civilians.”

The US State Department previously acknowledged that all territory controlled by IS had been liberated in March 2019. Washington continues to maintain an estimated 900 troops in Syria, without permission of the government in Damascus or the UN.

Earlier this week, Erdogan said Türkiye’s objective was to create a “buffer zone” along the Syrian border, specifically mentioning the cities of Tall Rifat, Manbij and Kobane. The 30-kilometer strip was the stated objective of the 2019 Turkish incursion into Syria, which drew condemnation from some NATO allies and sanctions from the US. (RT)