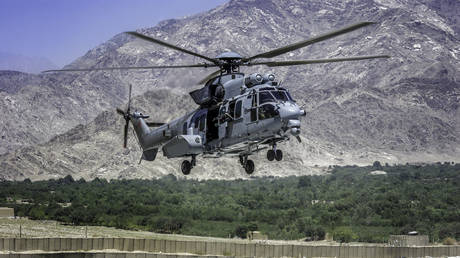 Equatorial Guinea has detained a French military helicopter, with the vice president claiming it landed without authorization after violating the African state’s airspace. France has denied any wrongdoing.

Vice President Teodoro Obiang Mangue said the aircraft was a “French military reconnaissance helicopter” which landed at Bata International Airport, despite having no authorization and allegedly breaching Equatorial Guinea’s airspace.

“This demonstrates once again the intention of France to destabilize the Republic of Equatorial Guinea,” Mangue tweeted on Thursday over the incident.

The helicopter was carrying six unarmed French soldiers, according to a statement from French military spokesman Colonel Pascal Ianni cited by Reuters. Ianni denied that France had any intent to harm Equatorial Guinea.

“The authorities in Equatorial Guinea decided to detain the helicopter. The issue is being resolved at the diplomatic level,” Ianni stated.

The helicopter incident comes amid rapidly growing tensions between the two countries after an embezzlement scandal involving Mangue.

France’s top appeals court upheld a guilty verdict against Mangue, son of President Teodoro Obiang Nguema Mbasogo, on Wednesday, over his conviction for embezzlement and money laundering. The VP had been handed a three-year suspended sentence and a 30-million-euro ($33 million) fine at the end of his trial in absentia in 2020.

The case centered around Mangue’s luxury residence on Avenue Foch in Paris – a mansion which reportedly boasts 101 rooms, a gym, a hair-dressing studio, and a disco with a cinema screen. The lavish building was valued by the NGO Transparency International – one of the parties to bring forward the case against Mangue – at around 150 million euros. (RT)