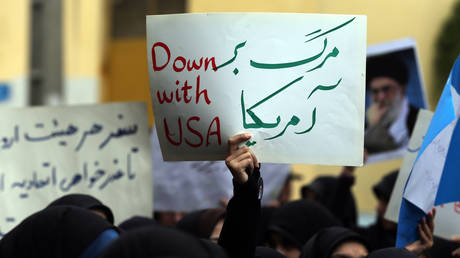 FILE PHOTO: An Iranian protester holds a placard reading "down with USA" during a demonstration in Tehran, Iran. April 8, 2014 © AFP / Atta Kenare

The US government-funded Voice of America’s Persian news service must “do a better job” with its anti-Iran news coverage or it risks being shut down, US Special Representative for Iran Brian Hook has warned.

In an unintentionally irony-laden oped published by the New York Post on Wednesday, Hook wrote that VOA Persian “needs to do a better job of countering Iranian disinformation and propaganda.” This is a priority for the Trump administration which is merely trying to “support the Iranian people” with “truthful reporting.”

Yet VOA, he raged, is “failing to represent America to Iran with fact-based content.”

In other words, even a US-funded propaganda outlet founded in 1942 to serve the “long-range interests of the United States” is not as extreme in its anti-Iran reporting as the Trump administration would like it to be. Hook went so far as to claim Iranians have complained that the outlet operates less like the Voice of America and more like the “Voice of the mullahs.”

Also on rt.com Take that, Trump! Venezuela’s oil shipments from Iran show how alliances can help defy US sanctions

Hook delivered a litany of complaints about VOA, which received $17 million in taxpayer funds last year, including that the service aired some “nature documentaries” during anti-government protests sparked last November by rising fuel prices.

Seemingly to strengthen his case, he also cited a 2013 Wall Street Journal report in which a VOA employee said the outlet would not air criticism of the Iranian government without it being “balanced with the perspective of the Islamic Republic.” (RT)