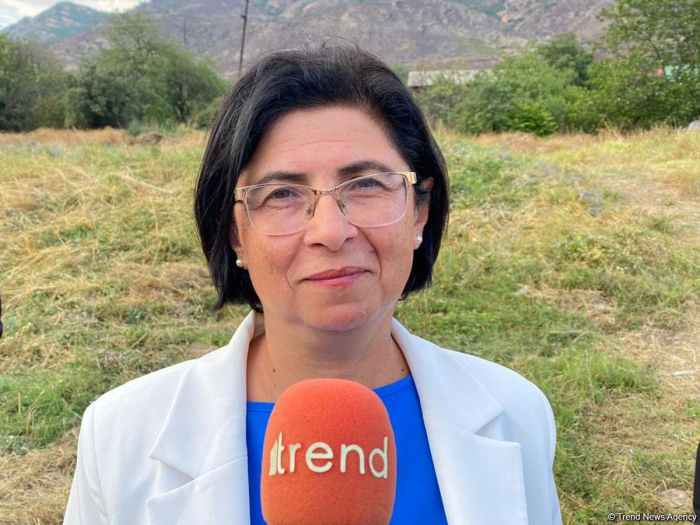 The entire ideology of Armenians is based on hatred and a false history, said Farah Aliyeva, Head of the Department for Humanitarian Policy, Diaspora Issues, Multiculturalism and Religion of the Presidential Administration of Azerbaijan, Head of the Working Group on Science, Education and Culture of the Interdepartmental Center under the Coordination Headquarters, created with the aim of solving in a centralized manner the issues in the territories of Azerbaijan liberated from Armenian occupation, according to Trend.

“As soon as the war (44-day Armenia-Azerbaijan second Karabakh war, took place from late Sept. to early Nov. 2020) ended, on behalf of the head of state, large-scale reconstruction work was launched on our liberated territories,” the official said.

Aliyeva noted that for a coordinated solution of socio-economic, humanitarian, and other issues, for implementation of construction and restoration work on the liberated territories, by order of the head of state, a Coordination Headquarters was created, under which a Center for more flexible management was formed.

“There are different working groups in the center. One of them is a group on science, education and culture. The presidential decree was issued in November, a few days after our victory, and during this period colossal measures were taken to plan and design the work that will be carried out there,” she said.

“We are holding meetings of working groups on the liberated lands to carry out this work in more detail. On July 29, we visited Aghdam and collected significant information. We visited the historical sites of the city, examined the cultural monuments. To be honest, what we saw in Aghdam shocked us. Almost nothing is left of one of the most beautiful, prosperous, and developing cities of Azerbaijan. But we believe that the future of Aghdam will be as bright as we remember it,” she said.

Read more:   'The world today needs a Hitler,' CNN contributor says in now-deleted tweet – but, turns out he had more than one

“In Aghdam, we visited the Imarat complex, Shahbulag, Giyasli, and Juma mosques. As is known, during his trip to Aghdam, the head of state laid the foundation for many projects and gave special instructions. Among them, I can note the grandiose Victory Park, or the Museum of the Occupation, which will have a very original concept. We looked at everything and exchanged views. The working group includes scientists, experts, representatives of relevant government agencies,” Aliyeva noted.

“After Aghdam, we visited the city of Shusha – the cultural capital of Azerbaijan. An urban state reserve has been created there. We have hundreds of cultural and religious monuments in Shusha, and their inventory has already been completed. We examined them, and before that, we visited the historical quarters of Aghdam, where restoration work is already underway,” the official said.

“We also visited the Albanian temple in Hadrut. In addition, we visited Uzerliktepe in Aghdam, and excavations will begin there in the coming days. We work not just as officials responsible for the implementation of these tasks, it is our civic duty. On these lands, our martyrs gave their lives, these territories were returned at the cost of their blood. Therefore, our sacred duty is to turn Karabakh into a paradise, as the head of state said,” Aliyeva stressed.