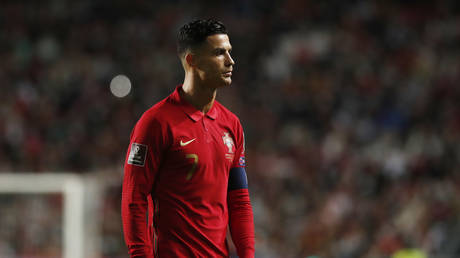 Ronaldo and Portugal have been handed a tough World Cup play-off assignment. © Reuters

Fans of football superstar Cristiano Ronaldo have reacted with outrage after the play-off draw for the 2022 World Cup put his country Portugal on the same path as Italy.

Portugal will face Turkey and Italy do battle with North Macedonia first off, with the winners of each match meeting in a final.

As a consequence, this means that one of the two last Euros champions will not be heading to Qatar in winter next year.

Not getting any younger at 36, the 2022 World Cup could be CR7’s last chance to win the highest prize in world football after becoming a continental champion in 2016.

Bracing themselves for the worst and Euro 2020 holders Italy turfing Portugal out, Ronaldo’s loyal devotees have reacted on social media at what they perceive to be a lack of justice for their man given the way events worked against Portugal.

Italy and Portugal have been drawn in the same qualifying path in World Cup playoffs.One of them won’t be going to the 2022 World Cup 🤯 pic.twitter.com/0W4Oh4XJ3k

Most of the rage centered on an incident earlier this year when Fernando Santos’ men played Serbia, who qualified automatically following their 2-1 win in Lisbon in the return fixture a fortnight ago.

Their first meeting in Group A finished a 2-2 draw in Belgrade, but Ronaldo was left seething when his goal was incorrectly ruled out with seconds to spare despite replays showing the ball had crossed the line.

Throwing the captain’s armband to the ground in disgust, Ronaldo was criticized at home by some pundits in a row that his elder sister Katia Aveiro waded into.

Ok so apparently a stupid refree mistake is on border of stopping Ronaldo from his last wc pic.twitter.com/JHkWcMcWcG

“Ronaldo is gonna miss a world cup because a sh*t stadium didn’t have freaking goal-line technology,” scoffed a sympathizer on Twitter.

“OK, so apparently a stupid referee mistake is on the border of stopping Ronaldo from [heading to] his last World Cup,” was another similar remark.

Some preferred to look for positives where they could, however.

“If Cristiano Ronaldo somehow manages to take down Italy, yes Ronaldo, (not Portugal), then he deserves the 2022 Ballon D’or by default.

“Not even joking,” quipped one onlooker.

If Cristiano Ronaldo somehow manages to take down Italy, yes Ronaldo, (Not Portugal), then he deserves the 2022 Ballon D’or by defaultNot even joking

He could have taken down Serbia if he is all that pic.twitter.com/3t2khHoHII

When this was mocked by Messi fans, Ronaldo’s gang said that winning this playoff run is harder than lifting the Copa America, as has probably been enough for Messi to get the France Football gong for the world’s best player set to be awarded in Paris on Monday.

“He could have taken down Serbia if he was all that,” concluded another hater. (RT)

12:52 Yashar Aliyev: Armenia did not provide accurate information about hundreds of thousands of mines