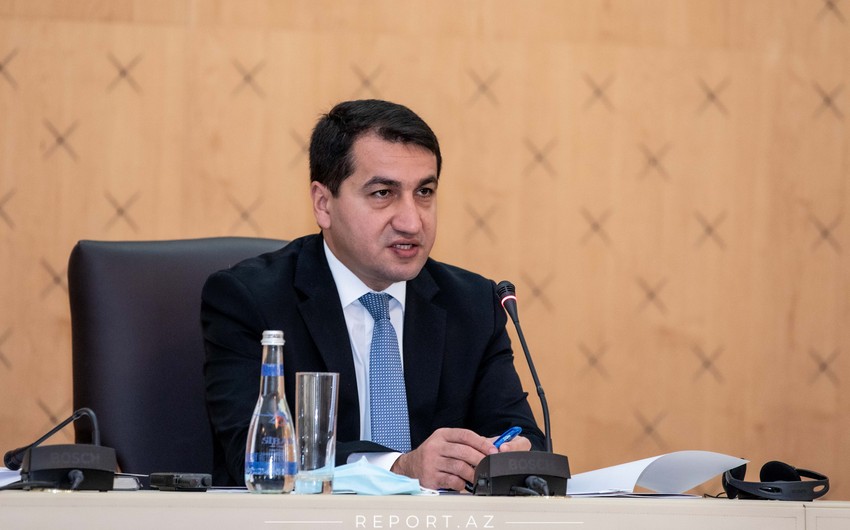 The settlement of the Nagorno-Karabakh conflict in many respects predetermines the future of not only Azerbaijan but the entire region. The development prospect includes cooperation, thereby stipulating close interaction to ensure security in the Nagorno Karabakh region.

Assistant to the President of Azerbaijan, Head of the Department of Foreign Policy Affairs of the Presidential Administration Hikmat Hajiyev spoke about further opportunities and unresolved challenges at an event moderated by the Director of the Eurasian Center under the Atlantic Council, former US Ambassador to Ukraine John Herbst.

Hajiyev first spoke about possible prerequisites, which were negative and only exacerbated the situation. He noted that Armenian Prime Minister Nikol Pashinyan decided to completely change the vector of the problem by ignoring Azerbaijan’s constructive approach and strategic patience. The parties could move together towards a peaceful resolution of the conflict, but Pashinyan had his vision on this matter.

Instead, Pashinyan visited Nagorno-Karabakh, where he said ‘Karabakh is Armenia and full stop.’ At the same time, Defense Minister David Tonoyan, while on a visit to the United States, proclaimed a new Armenian army concept – ‘new wars for new territories.’

The provocation of July 2020 in the Tovuz district added fuel to the fire – moreover when Azerbaijan was only a couple of months from the launch of the TAP project. All these factors contributed to the escalation, which began after Armenians shelled Azerbaijani civilians on September 27, 2020.

And that time we said – enough is enough, the presidential aide said.

Azerbaijan was obliged to engage in a peace enforcement operation to bring Armenia to the negotiating table, and also to ensure the security and safety of the Azerbaijani civilians and also ensure the implementation of the UN Security Council resolutions on the Armenian-Azerbaijani conflict, Hajiyev added.

Azerbaijan has repeatedly stated that it is ready to stop hostilities on the condition that Armenia provides a schedule for the withdrawal of troops from the occupied Azerbaijani territories, but Armenia refused to do so.

By the way, the need for such a schedule was also emphasized in the UN Security Council resolutions. In such military operations, it is always necessary to clearly understand when to stop, and Azerbaijan stopped only when its strategic goal was achieved, he said.

Hajiyev also touched upon Russian peacekeepers, who play an essential role in the post-conflict stage. He stressed that the Russian peacekeeping contingent is fulfilling their job professionally and trying to keep a good balance and open channels of communication between the Azerbaijani and Armenian sides.

Azerbaijan provides infrastructural and logistic support to Russian peacekeepers, including in their humanitarian activities in the area of responsibility, he said.

The further development of relations between Azerbaijan and Armenia raises many questions. In his speech, Hikmat Hajiyev also touched upon this topic. The need to take a sober view of the future and change the narrative should become the main development topic between the two countries. Armenia’s possibilities for resolving the conflict aren’t limited: Armenia will have the opportunity to access the Russian market through Azerbaijan. At the same time, Azerbaijan will get a land connection with its Nakhchivan region.

Think about the future! Thirty years of military occupation. What have you achieved? Nothing. The cost of the occupation was extremely high. But now there is a real opportunity for peace between Armenia and Azerbaijan, Hajiyev added.

He said that during the military operation to force Armenia to peace in 2020, Azerbaijan did everything to avoid collateral consequences for the civilian population. But at the same time, Armenian citizens of Azerbaijan must respect the laws and territorial integrity of their country of residence.

He also spoke about OSCE Minsk Group, whose authority in Azerbaijan isn’t very high for obvious reasons. The reason for such a situation is that for 30 years, the OSCE Minsk Group hadn’t been able to achieve a breakthrough in the peace process and ensure the de-occupation of Azerbaijani territories. If expectations regarding the future role of the OSCE Minsk Group co-chairs are concerned, then adaptation to new realities should be a priority task for this structure. In this case, as Hajiyev mentioned, the OSCE Minsk Group could play a positive role in strengthening confidence-building measures between Armenia and Azerbaijan through various projects.

The new geopolitical situation welcomes regional cooperation and does not exclude the participation of other countries. As for the United States, Hajiyev proposed several options to contribute to the development of the region.

He stated that the United States could participate in the reconstruction, demining, and rehabilitation of the region. The participation of the private sector and American companies in this process, especially considering their experience in the construction of smart cities, will be very positive.

The US can also deflect elements of revanchism in the Armenian society and to bring Armenia to the new realism that Armenia should also reconcile with the new realities on the ground, Hajiyev stressed.

At this stage, the economic, transport and other possibilities of the region’s countries aren’t limited by anything. An example of this is the agreement on cooperation in the railway sector between Azerbaijan and Iran, signed on January 19.